If you have to buy a souvenir from some exotic place, but don't want to add much to your luggage weight or volume, you might look at buttons.

I bought these in 1971 in Copenhagen with my mother.  I don't remember whether it was a fabric store or some other place, but I do remember that we spent some time going through a lot of choices before settling on these iridescent fuchsia numbers, apparently made out of some kind of shell.  They're so reflective that I couldn't get a photo to show them all the same color, which they are in life. 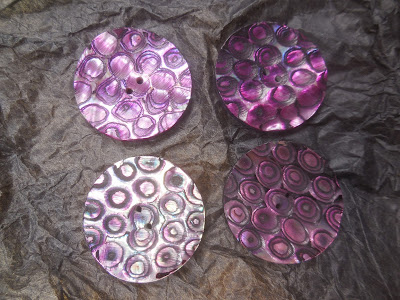 At the time I thought the buttons would look wonderful on a purple wool dress (yes, they would have!) but the wool never got bought, the dress never got made, and the buttons have resided in my button box ever since, carefully wrapped in the same black tissue paper from the store.  Every year or so I take them out of the box, unwrap them, enjoy them, and put them back.  I suspect I've had as many total minutes of bliss from these buttons as if I had put them on a dress.

Then in 1994 I went to Prague with my sister, and this time we found ourselves in a pottery/shop that had a big display of ceramic buttons.  We couldn't restrain ourselves, and each bought several sets of buttons in different sizes, shapes and colors.  When I got home I carefully affixed them to double-sided tape, mounted them on a piece of cardboard and stored them in a plastic bag. 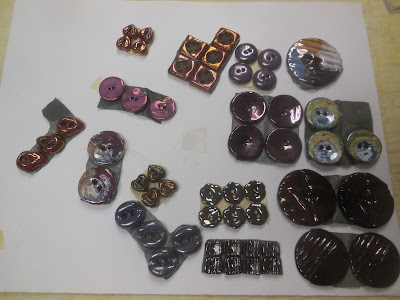 This time I actually did use some of the buttons.  A few ended up on a vest, some more on a dress, and I sewed two big shiny black-and-brown ones to some very plain black microfiber shoes, which looked much better with the addition. 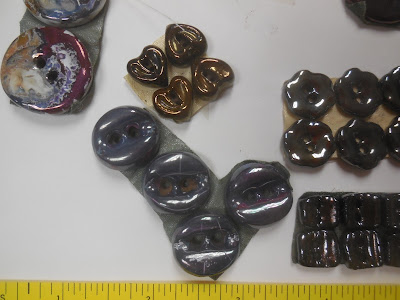 Now that my garment-sewing days are over, I probably should think of something to do with these fabulous souvenirs.  Sew them on store-bought clothing?  Incorporate them into art?

Or is it better just to HAVE them, to take them out of their storage places now and then to look at them, feel them, love them?

Posted by Kathleen Loomis at 5:44 AM