During the Great Depression my father, like so many other people, had a hard life.  His dad died of cancer, but not before using up the family's savings on hospital bills; he had to drop out of college after two years; he had a bunch of crappy jobs that he hated, including selling Libby's canned goods on the road in central Michigan.  But as things got better, he had a great opportunity, to work at and subsequently buy half of a weekly newspaper in Frankenmuth, Michigan. 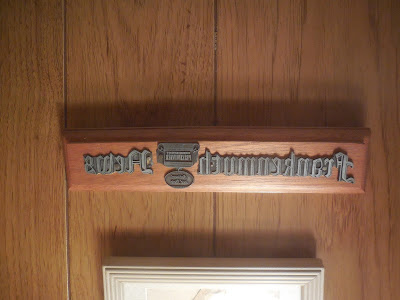 Frankenmuth was a tiny town settled by German immigrants in the 1840s.  Their plan was to save the heathen Indians not by sending a single missionary but by sending entire villages of people who would set a good example by living in Christian harmony in a community centered on the Lutheran church.

Unfortunately for the missionary effort, when they got to Michigan the Indians were long gone, driven out by loggers and settlers, so the immigrants simply went about their business, living in Christian harmony in a community centered on the Lutheran church.  My great-great grandfather was one of those immigrants, arriving in 1853.

Dad and a bunch of other young men came home from World War 2 determined to breathe new life into the staid old town, where people still spoke German as easily as English.  Dad had a great idea: Frankenmuth should capitalize on its German heritage and go for tourist business.  There were already three hotels in town that had become famous for serving chicken dinners, and people were accustomed to stopping for a meal on their way to and from Detroit.  The guys persuaded the local bank, ready for a new building, to use Bavarian architecture, and from then on other businesses did the same.

Pretty soon Frankenmuth had become a kitschy tourist town famous around the world.  Dad's buddy Wally Bronner opened a year-round Christmas store, selling ornaments, artificial trees, inflatable Santas, every kind of holiday stuff.  The hotels, now remodeled in Bavarian style, cranked out chicken dinners by the bazillion.  Main Street was filled with shops selling Germanic souvenirs.  The town was the first place outside of Germany to get an official imprimatur from Munich to hold a sanctioned Oktoberfest.  For years Frankenmuth was either #1 or #2 in the list of tourist attractions in the state.

When our family moved away from Michigan (I was 9 years old) Dad still kept his half of the paper as an absentee owner.  He always said he was waiting till I got out of journalism school and could take it over.  Privately I thought I would sooner move to Siberia and herd yaks, but didn't say this out loud.  Nevertheless, I was kind of hurt when, in my senior year of college, he sold out to his longtime partner without even discussing it with me.  All for the best, of course.

We buzz Frankenmuth whenever we go back to Michigan, which isn't all that frequently.  We always bring a cooler so we can load up on sausages at Kern's, and of course drink a beer and eat a chicken dinner.  And I always walk by the Frankenmuth News building, which is now the local history museum.  As Oscar Hammerstein wrote, "This nearly was mine."