In 1979, I guess, because that's the copyright date, I bought a set of World Book encyclopedias.
Son #1 was seven years old and it seemed like this was a good time to get set up for the inevitable school routine of looking things up for reports.  Strangely, I don't remember that we ever used the books all that much.  The boys weren't old enough for the Internet to become the school routine of choice, but maybe the style in pedagogy was to downplay looking things up.  Or maybe they did it in the school library.  Or maybe they just blew off their homework. 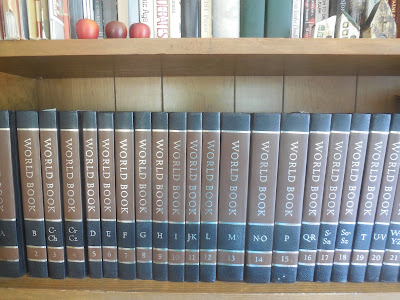 Time passed and the World Books continued to occupy their prime shelf space in the office.  The Internet came along.  We hardly ever touched the encyclopedias.  And in 2009 I had a brainstorm, which was that they might have a second career of great usefulness.  I decided that it would be OK to cannibalize them for art.

You must realize that I was raised to worship books.  I thought it was a venial sin to set a book open on the table face down or crack its spine.  It was a mortal sin to write in a book, or cut it up.  The thought of defacing a whole set of encyclopedias was terrifying.

But I told myself that (A) we hadn't opened the books in decades.  (B) this was not a valuable artifact; probably there are 3 million unused sets of World Books lying around in offices, basements, attics and landfills.  (C) nobody else could possibly use them; even if paper encyclopedias themselves aren't obsolete, the 1979 version surely is.  And (D) if I used them for art it would be better than not using them at all.  So I cut out pictures and articles for a series of daily postcards I was sending to various family members.

Since then I've gone into the encyclopedias with gusto.  I've cut out pages to use for found haiku; I've cut out pictures for collage; I've cut out words and phrases for my daily text project.  Never a week goes by without me consulting the books; surely a lot more than we ever used the books in their first career.

I still haven't reached the point where I'm willing to tear the covers off the books, although I have made art with covers from other people's discarded World Books.  I still need mine for "reference" -- if you need a picture of Harry Truman or a fish, it's so easy to just grab the right volume off the shelf, look it up and cut it out.