The daily people get ready to assemble


I've written before about my "daily people," little sculptures made from leftover fabric bits.  I started making them as a 30-day project for my art book club, but when the month was over they kept coming.  I've tapered off since then, and haven't made any in several weeks, but a new challenge has brought them out of their shoeboxes and on their way to public display.

The occasion is a fundraising dinner honoring Jon Fleischaker, a local attorney who has specialized in First Amendment cases.  Artists have been invited to decorate the tables with something related to the First Amendment, and when I was asked to participate last week I thought of my little people.  I've thought all along that I wanted to eventually display them in a crowd, and since the First Amendment guarantees the right of the people peaceably to assemble, there you go!

Now to find the appropriate base, and construct some kind of supports so they can stand up.  Maybe some of them will carry signs.  Maybe I'll need more of them, especially men (since so many of the ones I've already made seem to have skirts -- not that I've deliberately tried to make women, but that it's easier to construct skirts then legs).  I'll probably want to hold a casting call and reject some of them who don't seem to play well with the others. 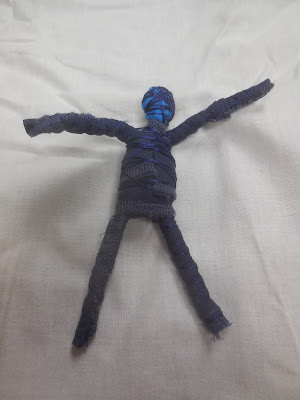 I'll keep you posted on what happens next!  The art has to be installed on October 17 so I have to get going.