Just checked my email and was intrigued by a message with the subject line "A goat named Kathleen Loomis."

I have donated to the Heifer Project before, following in the footsteps of my parents who would give a sheep or chickens to poor families in faraway places as Christmas gifts to their grandchildren.  When our grandchild turned six last year, we thought he was old enough to understand the concept of charity, so we donated a goat and had the project send him a personal letter.  (A nice touch -- I got to write the message, and they printed it out with a goat picture and mailed it to him.)

Afterwards, his mom reported back that a few weeks after the letter arrived, he wanted to know when the goat was going to arrive and where they would put it, since the back yard is kind of small.

Oops.  I said maybe we did this too early -- maybe he isn't old enough to understand how this works.

No, she said, he understood and was fine with giving the goat to a poor family, but he thought after they had it for a while it would be nice if he could have it for a while too!

So this year the organization is trying hard to get me to donate again, which I plan to do, but haven't gotten around to it yet.  They have been sending me emails for the last week or so, including this one, which explains "We're expecting newborn baby goats on the Heifer Ranch this spring.  We're going to name our next baby goat after one lucky donor who makes a tax-deductible gift before midnight tomorrow.  Will it be you?" 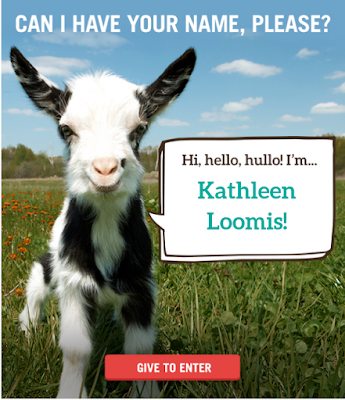 To be honest, I'm not sure I want a baby goat named after me.  I already have a baby human named after me (well, it's her middle name, but still...) and a goat seems like a step backward.  I wonder whether this is going to turn out to be a successful fundraising approach or not.