Over the years we have become less and less inclined to do a lot of Christmas decorating, giving away huge boxes of ornaments to our kids and putting up fewer outdoor things that require climbing on ladders in the cold.  But there are a few doodads that are non-negotiably required.  Such as my angel choir.  (I know it's really an orchestra, not a choir, but for some reason that's what I have always called them and I'm not going to change now.) 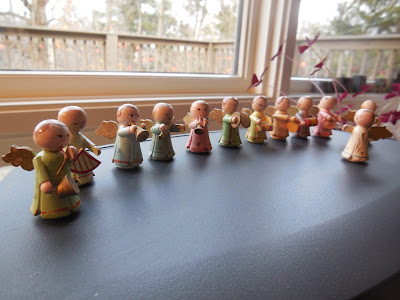 When I was about 12 my godmother sent the angels to me.  She didn't ordinarily send gifts but maybe this was special because I was confirmed that year?  Anyway, it was the first Christmas doodad that was mine alone, rather than a family possession, and I always took great care with where and how the angels were set out.

They never had a regular place, but would be arrayed wherever it seemed best.  Every year they tried out different formations: all in a row, or in a two-by-two procession, or arranged into percussion, brass and string sections.  Here they are performing from atop the Bose radio, so their songs can be broadcast throughout the house. 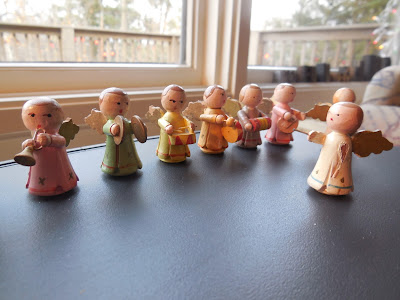 Over the years the angels have shown some signs of wear.  A few wings have broken off and had to be glued on.  The conductor has lost one arm (fortunately not the one with the baton).  There some paint chips.  But they continue to make beautiful angel music