I got interested in Zuñi fetishes, those tiny carved animals who represent the Prey Gods or guardian animals of the six regions of the earth, in the late 1980s when I took my sons to Los Angeles on a business trip.  My professional organization was holding its convention at Disneyland, in a resort hotel that was adjacent to the park, and it seemed that the boys, in their early teens, could occupy themselves safely while I attended the meetings.

One day we drove into the city to ooh and aah at the weird people on Venice Beach, and to gape at the La Brea tar pits.  And we went into the next-door museum, where the gift shop was having a big sale on fetishes.  I fell in love, and bought several, and over the years I have gotten many more on visits to the Southwest.  Here are some of them: 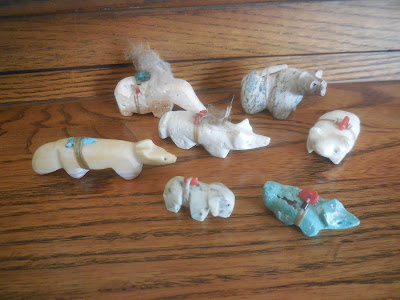 Before fetishes became collectible art objects, they were used ceremonially and carried in small pouches by hunters for protection and good luck in hunting.  Thus they were small -- the littlest one in this photo, the donkey in the center front, is only about an inch long. 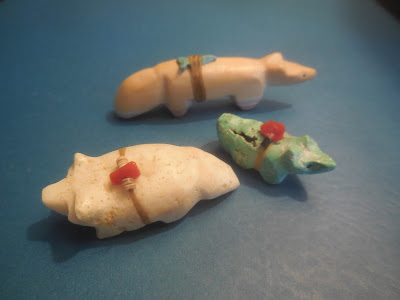 Each of the fetish animals has a little "prayer bundle" tied around its middle, which it carries for its own protection and good luck.  According to tradition, you're supposed to feed your fetish animals to keep them healthy and happy, by strewing some cornmeal in their case or pouch.  Mine have never been fed but I think they're still happy.  I know I am.


Posted by Kathleen Loomis at 5:35 AM