Disappointment in the museum


We drove over to Evansville IN on Saturday night to attend the opening of the 45th Mid-States Craft Exhibit, a venerable juried show that the Evansville Museum has sponsored for many years.  This show appears every other year, alternating with the Mid-States Art Exhibit (which doesn't accept textiles).

I was pleased to have one of my big flag quilts accepted for this show, and was looking forward to the visit.  Six years ago this week I was planning to attend the opening of the same show, and even receive an award, but found myself in the hospital instead for sudden surgery.  So this was a chance to remove a jinx.

As we walked through the museum, we passed signs: 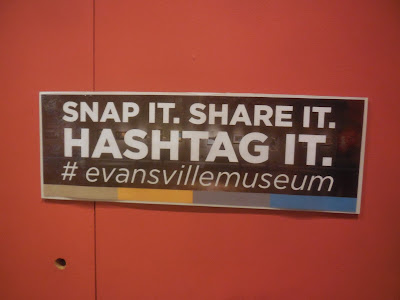 But when we got to the Mid-States room, and I took out my camera, the guard leaped on it.  No photos.

But this is my piece!

An onlooker summoned the museum director, who said of course it would be fine for me to take a picture of my own quilt.  She explained that they banned photography because the museum doesn't own any of this work and they didn't know whether it would be OK with the artists to have their work photographed.

This explanation was more mystifying than reassuring. 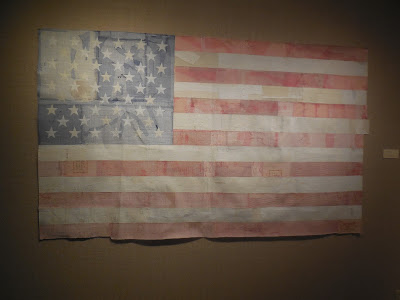 First off, why do artists enter juried shows?  Presumably because they want their work to be seen, by as many people as possible.  (At least that's why I enter.)  And in this day of social media, having your work posted online has the potential of reaching far more people than just those who come to the museum.  Which is presumably the reason why the museum posts those "Snap it share it" signs.  So presumably artists would be happy to have their work photographed, and with any luck, distributed online.

Second, I don't believe I have ever entered a show where I didn't expect my work to be on display for public consumption (including photos).  Yes, some shows are picky and ban photos, but I've always thought this was (a) wrong-headed and (b) because they want to sell catalogs.  For shows that don't have catalogs, like the Mid-States, I am especially interested, as an artist, in having the show documented as widely as possible.  I know my work is going to be displayed in public, and I expect -- even hope -- that people may want to take photos.

Finally, if in fact there are artists who might have reasons to want their work NOT photographed -- which I have a hard time imagining -- show sponsors can take care of that in an instant by putting a line on the bottom of the entry form.  "I understand by entering this show I give permission for my work to be available for photography by the public."  Many shows have similar disclaimers on entry forms for allowing images to be used for public relations, so why not require that we allow use by public photography?  What's the difference?

Please don't protect me from the public!!!  If I want my work not to be photographed, I can easily deal with that by not entering the show.

I am sorry that I can't give you a review of the show, as I customarily do when I get to visit shows and museums that many of my readers can't.  There were interesting pieces on display in the Mid-States, and I would have liked to share my responses with you.