When my Dad was helping win WW2, his official MOS (military occupational specialty) was cartographer.  He never had a chance to find out what that meant in real service, because even before his division made it to Europe, he had been diverted to putting out a newspaper for the troops, but they did issue him a nifty little atlas, the 1943 edition, which he dutifully carried around for his entire length of service.

After the war the atlas soon became quaintly obsolete, all those dozens of newly independent nations still labeled with their colonial names (Belgian Congo, French West Africa, Anglo-Egyptian Sudan, Italian East Africa, Netherlands Indies, French Guiana, British Somaliland).  But the contours of the land were as they had always been.  I appropriated the atlas when I was maybe in fifth grade, when my fascination with maps became important.

I would put a sheet of carbon paper behind the page in the atlas, and trace it with a stylus to make maps for my term papers and book reports.  Raised to never, never, never, never put a mark into a book, I was meticulous about keeping the atlas pristine, although leafing through it today, I find black smudges on one page. 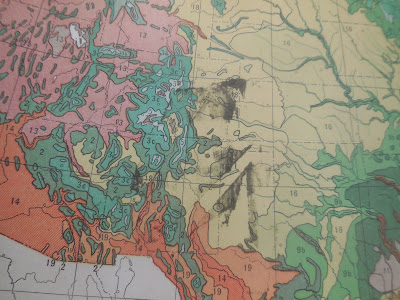 And apparently I decided to ink in the border between East and West Germany, which appears to stop in midstream, because by 1943 Czechoslovakia was just another part of Germany, no border indicated. 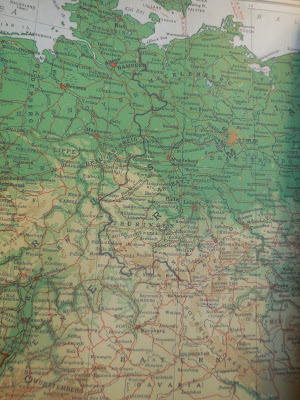 I've loved that book for many decades, often taking it down from the shelf just to recapture a bit of the world before I was born.  For instance, how intriguing to find the map of petroleum production with not a single green dot in Saudi Arabia, or the map of automobile production with the huge red circle in the US and the tiniest dot in Japan.  I can easily open any page at random and pfft, an hour has gone by. 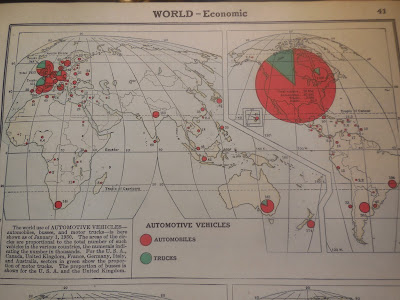 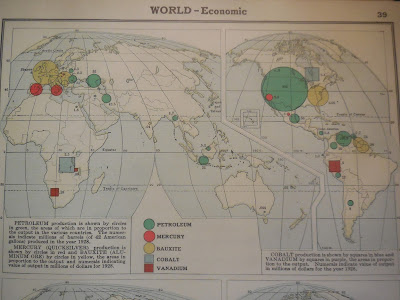 Over the years I've probably spent more time with this book than with any other single book in the world.  I own other, more recent atlases, but none of them fill the room with magic when I open them the way this one does.

It's fitting that I'm ending my year of favorite things with a book of maps, because my daily art project for 2018 is going to be maps.  I'll talk more about that in the next week, but for now I'll just close out a very good year (personally, if not for the world at large) with this wonderful thing.  On this New Year's Eve, I know we all hope for wonderful things, at least a few of them, in the year ahead, and I wish many of them for us all.


Posted by Kathleen Loomis at 5:51 AM