If you've ever been in a Lutheran church service you know that congregational singing is a really big deal.  When I still lived at home the major topic of conversation on the way home from church was occasionally the sermon or the Bible reading, but always the hymns -- I love that one, that one was way too slow, strange wording in the third verse, can't go wrong with a Bach cantata.  Of course I own modern hymnals, but wonderfully, I also own these four old ones. 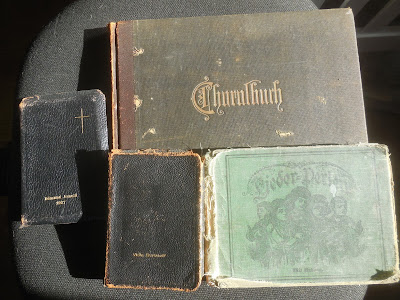 The big black one was my grandfather's, and my mother appended sticky notes inside with historical commentary. 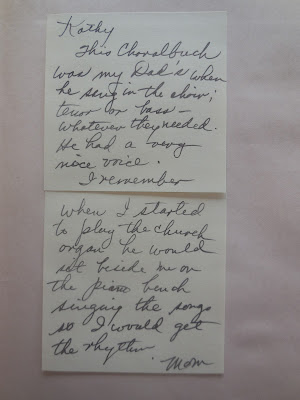 The really beat-up green one belonged to my grandmother's sister, and I don't know how it got into my possession.  Both these really old ones had words and music, in German, of course.  The latest of my ancestors to arrive in the U.S. emigrated in the 1880s and I'm sure they spoke English in town, but German at home and in church at least until World War I.

The two little ones -- with words only, no music -- belonged to my parents, with their respective names stamped in gold on the covers, issued upon their confirmations.  My father's book, given to him in 1927 when he was 14, was in German, his first language, from which I deduce that Holy Cross Church in Saginaw had not.  Or maybe they just had a box of books left over and weren't about to throw out a perfectly good book, even if it was in a language that the kids couldn't read any more; it would build their character.  Meanwhile, my mother's confirmation hymn book, given the following year, was in English.

By the time I learned to sing hymns, of course, everything was in English, and I know only tiny bit in German.  Stille Nacht, of course, and a few lines of my favorite Advent hymn, Es ist ein Ros entsprungen.  Since today is the first Sunday in Advent, here's that hymn from the little green book, in case you want to sing along. 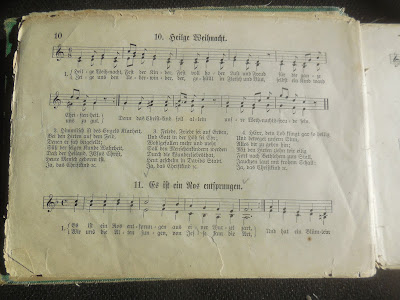