I've been faithfully doing my daily calligraphy, on two different tracks these days.  I'm still copying a passage from each book I read, either the day I finish reading it or the next day.  But on the other track I'm trying to find a style or styles of calligraphy that are less about writing and more about art.

I wrote about this a couple of months ago and some readers suggested that I try writing Arabic script, because it's beautiful and because I couldn't get distracted by meaning, focusing solely on the visual appeal.  So I did dutifully try Arabic for a while.  I found that writing from right to left was interesting and seemed to fire different neurons than when I write in European languages.  But I also found that right to left doesn't work very well with a dip pen and ink that takes a while to dry.  (New sympathy for lefties.) 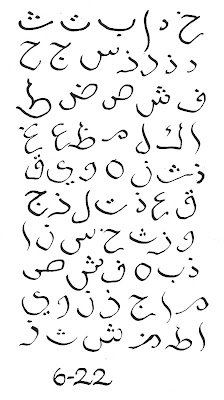 More important, I had a hard time finding exemplars to work from.  The Arabic alphabet sites that I found online showed individual letters but little help in how to combine them into longer "words" -- using that term loosely, because of course I had no idea of what I was putting together.  I realized only after more research that all these letters, when written into words, emanate from a baseline, and the letter charts don't tell you whether a given letter goes up or down.

I had better luck with sites in which Arabic writers posted samples of their own handwriting.  A great deal of variation, as you might imagine, and I enjoyed copying from them.  But I never did develop any comfort level that would let me "write" several characters in a row -- even if I permitted myself to write Arabic-like squiggles that weren't exactly correct letters.  In other words, I never could get myself into a rhythm that approximated the writing I saw on screen.  I felt like an impostor and I think the writing looked awkward as a result. 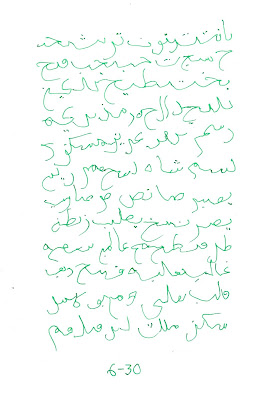 I abandoned this approach, even though there were aspects of it that appealed to me.  In particular, I liked the down-and-left stroke that resembles a fat J, but have found it difficult to incorporate into my left-to-right writing.  So, an experiment that did not pay off.  Maybe I quit too soon; maybe I should go back and try again. 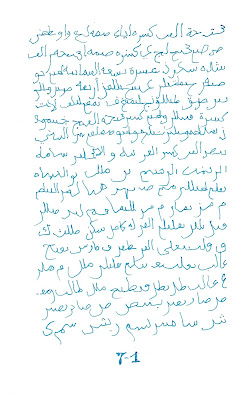 Posted by Kathleen Loomis at 6:20 PM