"The choice between black-and-white and color film is, then, not a matter of reactionism versus avant-gardism or of asceticism versus hedonism.  Color and black-and-white photographs are actually about different things.  Color photographs are disjunctive and sensual; black-and-whites are conjunctive and cerebral.  The photographer who uses black-and-white film starts out with an advantage: his medium evidently offers easier access to the subconscious, with its overtones of surrealism and repressed emotions, the expression of which is an essential function of art.  This access to the seething subconscious may help to explain why it is so difficult to imagine in anything but black and white the work of such photographers as Diane Arbus, in whose photographs there is an element of rapacious voyeurism, or Weegee, who was drawn to scenes of violence.  Their photographs simply wouldn't have been as powerful or as disturbing in color.  They would have been just gortesque or horrifying pictures rather than profoundly unsettling photographs. 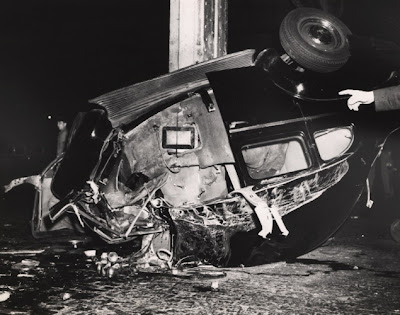 "The photographer who uses color film must work extraordinarily hard to make an image that resonates with anything like the kind of ambiguity and dreamlike, subconscious-stimulating qualities that come naturally to black and white.  It may be precisely an intuition of the magnitude of this challenge that began to attract so many sophisticated and adventurous photographers to color during the 1970s."

Kathy comments:  Would he say the same things today?  Have four decades of color photography achieved their challenge?  Check out what's happening today in black-and-white here.
Posted by Kathleen Loomis at 5:33 AM