Collaboration in the big leagues 2

Yesterday I wrote about a "collaborative project" memorialized in the New York Times, featuring an "artist" who stole his friends' work for a show.

Today's article on collaboration is a review of an exhibit at a New York gallery that reminds me of those old movies -- hey kids, let's put on a show!

Seems that an artist thought up a nifty idea and invited 13 of her friends over for an art party. They set up an assembly line and produced 40 paintings, each pretty much the same as the others.

Here's how the reviewer describes it:  "(Artist A) got things rolling with a large gray shape that seems to have suggested to several other participants a Mr. Potato Head waiting to happen.  (B) added eyes and nose.  (C) applied ears.  (D) contributed bright red glasses frames and (E) provided a halo.  (F), (G) and (H), as well as (I), surrounded this character with various abstract elements in colored pencil, brown paint, red and magenta silk-screen and black ink.  (J), (K), (L), and (M) made various physical interventions using yarn, string, fabric and a pen knife.  (N) collaged an image of potatoes for Mr. Potato Head's mouth, until supplies ran out and he substituted pictures of other produce.  (O) whispered an insult into each canvas and applied a Band-Aid."

Doesn't that sound like good fun?  Do you suppose it was fueled by an alcoholic beverage or two?  I'm sure it was, on both counts, but is it art?  The reviewer didn't think so.  "Apparently there was no one in charge of quality control," she wrote.  What a delicate way to put it. 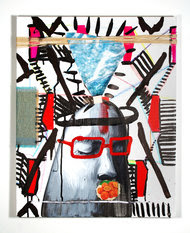 So my question is very similar to my question yesterday -- what was the gallery owner thinking?  Aren't there enough artists out there making real art, one or two of whom would give their left arm for a New York show?  And what was Roberta Smith, the fine art critic for the Times, thinking when she wrote this review instead of tearing up her notes and taking the rest of the day off?

I am not terribly upset that the big-time art world has questionable priorities.  I know that it rewards some people who arguably don't deserve it, because they hit the lottery and somehow got onto the gallery circuit.

But every now and then it gets so ridiculous and self-indulgent that I wonder where all the grown-ups have gone.


Posted by Kathleen Loomis at 5:21 AM