Last week I went on an art road trip with my best museum pal, putting on 960 miles and hitting five different venues in four days.  But the surprise treat of the trip was one that hadn't even been on our radar screen until we arrived in Pittsburgh.  Then we learned that a couple of days earlier, one of the downtown bridges had been yarn-bombed with almost 1000 knitted, crocheted and woven afghans! 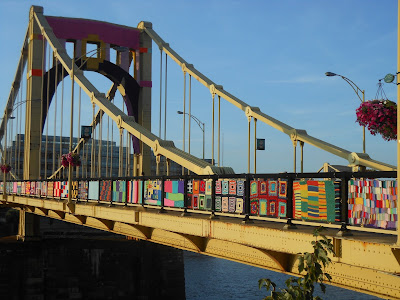 And quite the spectacle it made -- each space on the pedestrian railing between uprights was filled with not one but two afghans, one facing outward and one facing in.  Then the railings themselves were covered with black knit or crochet.  Over this past weekend the plan was to go back and also cover the bottom railing, right below the afghans. 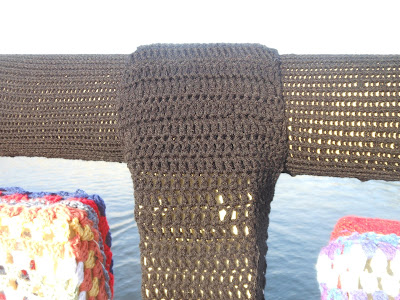 In addition, the two big towers of the bridge were adorned with a lot of knit fabric in geometric designs. 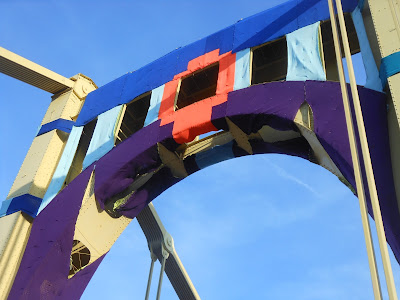 The project was dreamed up more than a year ago, planned to coincide with Fiberart International, which is held every three years under the sponsorship of the Fiberarts Guild of Pittsburgh.  (To get an idea of the prodigious planning required to get the project done, check out their blog here.)  The show closed yesterday, but the bridge will remain decorated until September 8.

And to judge from the pedestrians lingering on the bridge last week to inspect, discuss and photograph the afghans, the project is a big hit. 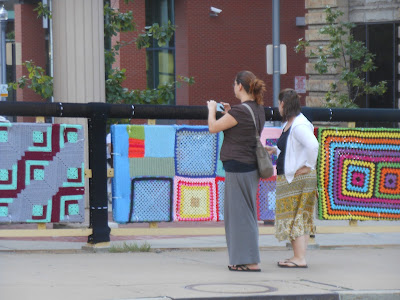 People from all over the region contributed afghans, which had to be 34" x 72" and made of acrylic yarn to stand up to the weather.  After they're taken down, the afghans will be washed and donated to homeless shelters and other charities.

By far the most popular design was the granny square; eight squares and a little border would do the trick.  What I loved best was the improvisational spirit of most of the makers.  A lot of people ran out of the colors they started with, and finished with something else.  A lot apparently decided to use up the yarn they had on hand, no matter what colors.  Some people made only a third or less of a complete afghan, which ended up being joined to other parts.  Some people made only a couple of eight-inch squares.

Mismatched or not, or perhaps because they were mismatched, these hit-or-miss afghans had amazing energy.  It helped that they were all pulled tight around the railings -- flat and taut, they looked like abstract paintings.  If there are bulges or droops, or if the afghans aren't exactly square, which is very likely with makers of all different degrees of expertise, none of that was apparent in this presentation.

Many of the afghans were surprisingly sophisticated in design, considering the limitations of the rules.  Here are some of our favorites.  Sorry about the shadows -- you can't make a bridge move its piers just so you can get a better photo. 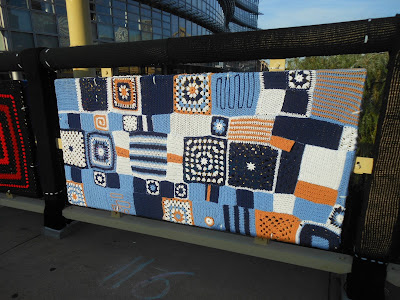 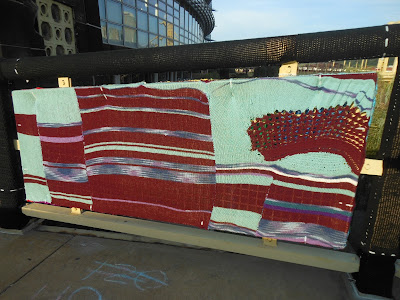 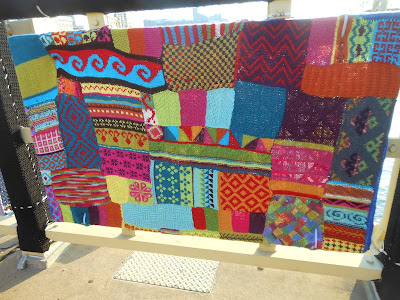 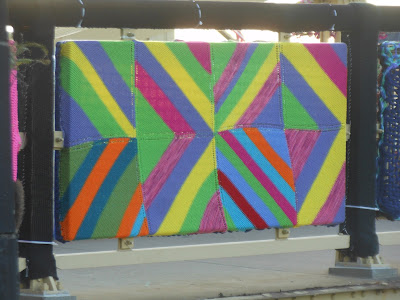 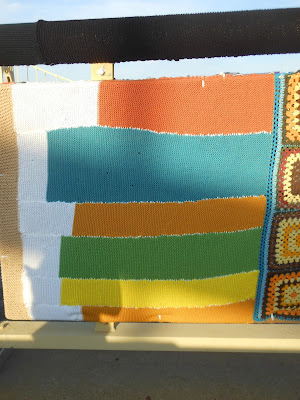