Blast from the past -- printing on fabric 1


Last week my art book club (the one where we never read books) had the theme of printmaking.  I was busy and instead of embarking on a new printmaking endeavor, I found the roll of quilts that included several that I had printed many years ago.  That seemed good enough for government work, so I took them for show and tell.

I was surprised to find one quilt that I had absolutely no recollection of ever making, and some that I had pretty much forgotten about.  But all of them looked fresh and interesting, which made me happy!  These quilts were made as long ago as 2000 and as recently as 2009, and most of them followed the same general recipe: make an interesting abstract fabric background, with fabric paint or discharge, then print letters or numbers from my big collection of old wood and metal printer's type.  I would do the letters one by one, applying fabric paint with a brush and then printing them onto the fabric like a rubber stamp.

I first tried this approach in 2000, making a little wall hangings with people's favorite mantras.  Here's mine -- a comment that I wrote on dozens of essays and stories submitted to me for editing: 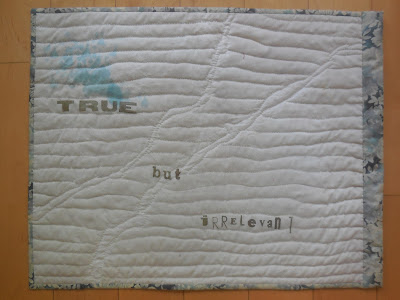 True but irrelevant (detail below) 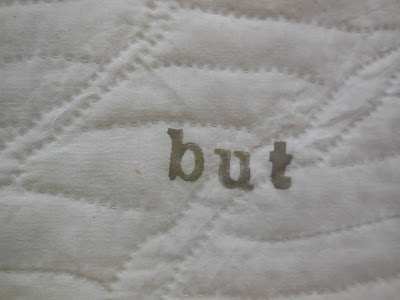 Here's my fathers -- a rule of typography that he must have proclaimed a thousand times in books, speeches and magazine columns: 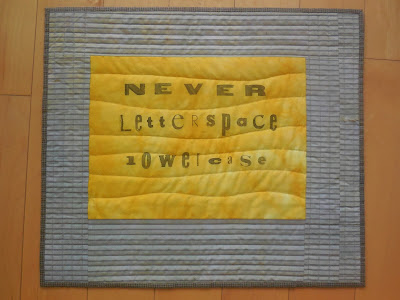 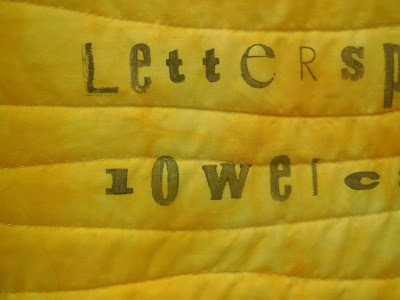 Later that same year I made a quilt for a challenge on the Quiltart list. We were to depict a proverb or saying from Ben Franklin.  I found one in "Poor Richard's Almanac" and came up with this illustration -- one half of my total lifetime production of representational imagery in quilts.  I found a cow on a cheater print fabric and gave her a 3-D ear and tail, but had to come up with Tim on my own.  I made my husband pose on a kitchen chair so I could draw a realistic looking guy, and was so proud because it wasn't too cutesy.

The saying read:  Tim was so learned that he could name a horse in nine languages.  So ignorant that be bought a cow to ride on." 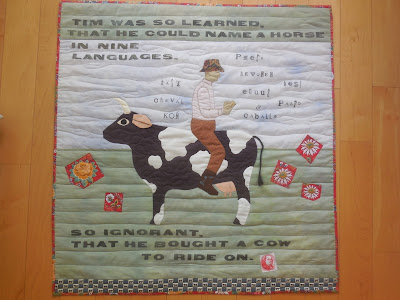 Ben on Tim (detail below) 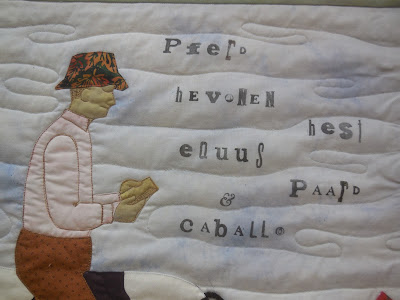 I'll show you more of my printing on fabric tomorrow.