Last week the great artist Magdalena Abakanowicz died.  Had she done so decades earlier, she probably would have been described as a fiber artist, because that's where she started off, making flat works out of burlap, bedsheets and clotheslines and weaving monumental pieces that were exhibited in Tapestry Biennials.  But, as the New York Times obituary put it, "Chafing at the limits of fabric art, she began to conceive of her work in sculptural terms," going 3-D with fiber and then with wood and metal.

Probably her most familiar works are the long series of huge forms she called "Abakans," a shortening of her own name.  Which, by the way, reflects her ancestry: she's a direct descendent of Genghis Khan, through his great-grandson Abaqa Khan (get it?).  I realized from the obit that all these years I have been mispronouncing her name; it's supposed to have the accent on the NO, not on the KAN.

Abakanowicz frequently made forms that closely or not-so-closely depicted people, and arrayed them in big crowds.  Looking at these works last week made me think hard about my own recent foray into making crowds of people from fabric.

I realized that Abakanowicz's people took strength and meaning from their crude forms and construction.  I had already been wrestling all along with not wanting my own people to become cute, not wanting them to become exercises in doll-clothes-making.  Now with Abakanowicz in mind, I made some new people that were deliberately more abstracted and more rough-edged.  I omitted the arms and kept the frayed edges prominent instead of turning them to the inside.  I replaced my usual cord wrappings with self-wrapping from torn strips. 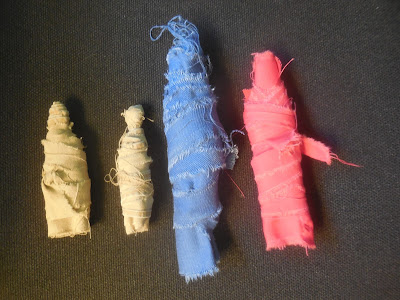 I like the effect and will probably stick with it for a while.  My homage to a great artist.