On the jamb of our front door, painted over with several coats of different colors, is a mezuzah, installed (I'm sure) by the first owner of the house, who was Jewish.  We're not Jewish, and yet I have a great fondness for that little talisman. 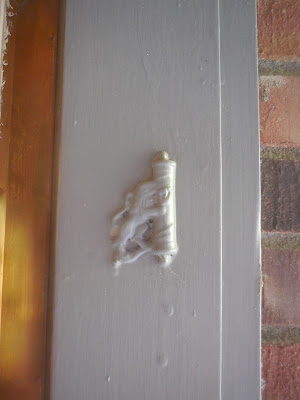 A mezuzah is a two-part item.  The important part is a little parchment scroll inscribed by hand with the Shema Yisroel, the verses from Deuteronomy beginning "Hear O Israel, the Lord is Our God, the Lord is One."  The non-sacred part is the protective case into which the tightly wrapped scroll is placed; the cases come in many different materials and designs.  Ours looks like a traditional Torah scroll case, held up by the triumphant Lion of Judah.

Jews are commanded to place the sacred words on the doorposts of their houses.  That always means the front door, but in some traditions it includes most interior doors as well.  In our house there's just the one.

There's some difference of interpretation as to whether the mezuzah acts as a protective amulet for those who live in the house, or simply as a sign of an observant Jewish household.  (And I suspect that many Christians, if they know about mezuzahs at all, confuse them with the Biblical story of the Jews in Egypt killing a lamb or goat and smearing the blood on their doorposts so God would not kill their firstborn.) I don't exactly believe that ours is shielding us from harm, and it's certainly not signaling a Jewish household.  What I take from its presence is the wording on the scroll, "the Lord is One."

The world has gotten itself into a lot of trouble over the millenia of civilization when one group of people beats up on another, insisting that their god is the boss and everybody else has to knuckle under.  So many lives have been lost in the name of God and I wonder what God thinks of that.  If we truly believed that the Lord is One, could we perhaps realize that people of other religions are just as sincere in their beliefs, and entitled to them, as we are?

Yes, every religion has its fundamentalists, who tend to be super-sanctimonious and super-eager to beat up on anybody who doesn't go along with all the right footnotes.  But I would like to believe that the Lord is One and that most of us on this planet would rather follow His will and live in peace than beat up on others.