My husband's great-grandfather, William Jones, a Wisconsin farmer, served in the Civil War, the only one of our ancestors on either side of the family to do so.  He fought with Sherman in his march across Georgia, and in one of the last battles of the war at Bentonville, NC.  As they marched through Georgia, living off the land, Willie was on a detail that foraged for food for the troops.  On one memorable day he and his two mates found three barrels of whiskey in a hayloft.  The two mates promptly drank themselves into a stupor, but Willie, a staunch Methodist who neither smoked nor drank, stayed sober and loaded them into the wagon.  After much prayerful consideration he decided to bring the whiskey too, which prompted the colonel to call him "the best damn pilferer in the Union Army."

As the war ended, his general and another general were in a furious race to get to Washington DC in time for the grand victory celebration -- and to be there before the other guy.  The generals, of course, were on horseback, but everybody else was on foot.  Willie was issued a heavy piece of equipment to carry on the forced march and developed a serious hernia before they arrived.

The injury was permanent, and he spent decades trying to get a disability pension, which wasn't awarded until the 1890s -- the grand sum of $16 a month (with, of course, no back pay).  But he still had enough patriotic spirit, apparently, to show up for the 15th anniversary reunion of the 21st Wisconsin Volunteer Infantry regiment.  The souvenir medal shows his colonel, Harrison Hobart, who later served in the Wisconsin state legislature. 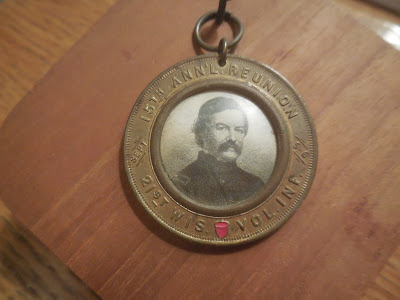 Somehow, of Willie's many descendents, we ended up with the medal, which has hung on our family picture wall for decades.