Conceptual art, which I enjoy both observing and doing, is big on text, and on the manipulation of same.  I decided early in my daily text project that it would be interesting to search out certain words in a given area of the newspaper and see what came up.

My first approach was to find all the people listed on page one for that day. 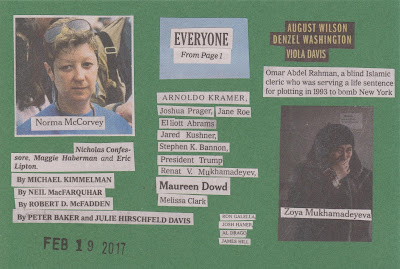 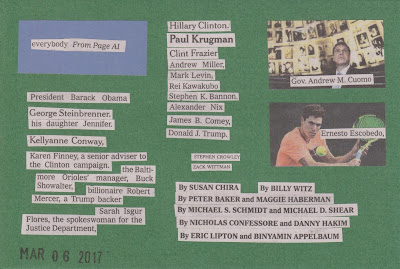 Next I looked for all the places in that day's obituaries. 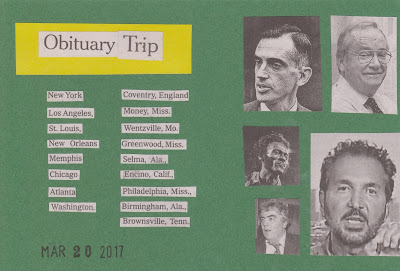 Then I looked for an alphabet of proper names. 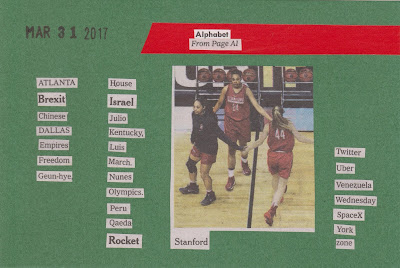 What I find fascinating about these lists is that they make you think and wonder.  I've done four everybody-on-page-one lists so far.  Trump, of course, is on every one, and so is Stephen Bannon.  But you might be surprised to find George Washington, not once but twice (and his cuz Denzel once).  The usual suspects (James Comey, Hillary Clinton, Barack Obama) are there, and so are the Pope, Warren Buffett, Roger Federer, Etan Patz, King Salman of Saudi Arabia and a bunch of ordinary people in foreign lands, many of them crying.

I plan to repeat these recipes many times in the coming year.  I look forward to seeing how the front page names reflect what's going on in current events, but also the lives of people we'll never hear of again.

Some days, of course, you can't do a decent list piece.  More than once I've looked at the front page only to find lots of stories with hardly any people (doesn't seem possible, but it happens), where all the photos are of oil wells or tornado damage rather than of people.  I've done a couple of alphabet pieces solely because I was fortunate to find a Q and an X, although on one I had to use a lowercase z.  A good day is finding a guy named Xander and a guy named Zaire, going to Qatar for a soccer tournament.