When my parents got married in 1941 they received this unassuming but beautiful vase as a wedding present.  It's a great example of the American Arts and Crafts movement that applied fine design to simple household objects.  A whole bunch of pottery companies flourished in southern Ohio around the turn of the century (that is, 19th turning to 20th), including Roseville, the maker of my vase. 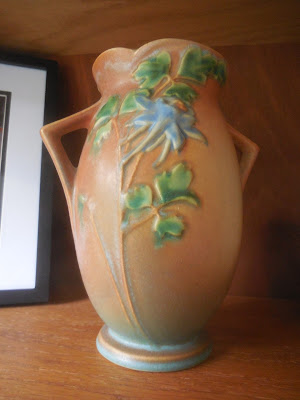 A while ago I decided to look online to learn more about my particular vase.  Since Roseville produced dozens and dozens of different patterns, and dozens of different variations on each one, I despaired of ever locating the one I wanted.  Fortunately I recognized the flower as a columbine, and sure enough, there was a pattern called "columbine."

It was made in three different colors, blue, pink and brown, and several different shapes and sizes.  After I'd spent some time clicking around on the website I realized that my vase was also identified by a number -- 17-7 -- and sure enough, that was one of the models listed under the columbine pattern.  It was dated as "circa 1941," which would be exactly right.  Apparently the vase is worth slightly over $100, but I know I would never sell it. 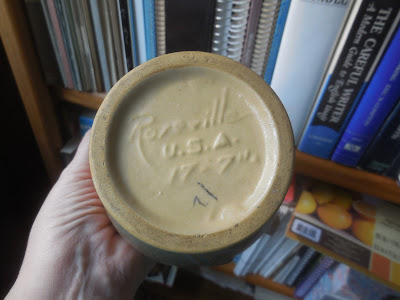 Nor do I use it for flowers, not that I'm hesitant to use family heirlooms but because I own plenty of vases in the same general size and this one sits so happily on a shelf in my office.

Some years ago I got to spend a couple of long afternoons at the Zanesville Museum of Art and was impressed by its large collection of art pottery, both vintage and contemporary, Zanesville, which sometimes calls itself the Pottery Capital of the World, is obviously proud of its industrial/artistic heritage, which was made possible by lots of good quality clay.

Here's a slew of Roseville from the museum.  Makes me kind of wish my vase had been pink instead of brown! 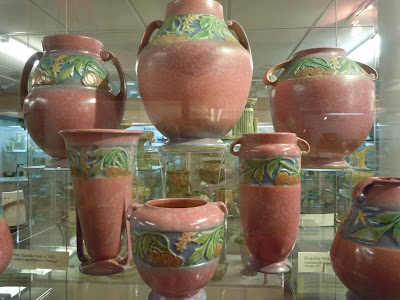 Posted by Kathleen Loomis at 5:20 AM