Quilts with a twist 2 -- Jane Lloyd


I wrote yesterday about an exhibit at the Portland Museum in Louisville that features two quilt artists.  Jane Lloyd has been in Quilt National several times with her signature spiral technique, as shown in this detail shot. 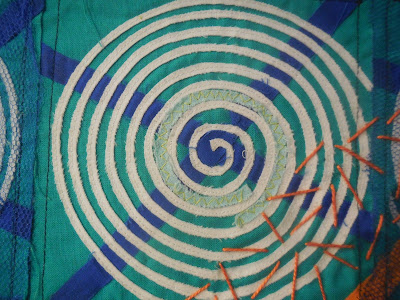 She makes a pieced background, puts a large swatch of fabric over the top and free-motion stitches a spiral through all the layers.  Then she takes tiny scissors and painstakingly cuts away a channel of fabric between the stitched lines to leave a skinny spiral (less than 1/4 inch wide), held down with the machine stitching and revealing the pieced background underneath.  In this quilt she has also put hand stitching, and some nylon net on top.

Jane has made a bazillion quilts like this, and several of them are on display in the Portland Museum exhibit.  But she's also tweaking the "recipe" in more recent works.

Here's one with the skinny lines making arch shapes instead of spirals.  And she has not one but two layers of skinny lines: first the small arches, then a tracery of vertical lines on top that form large arches. 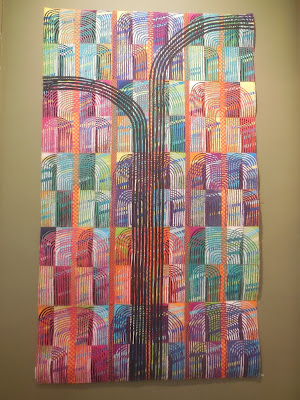 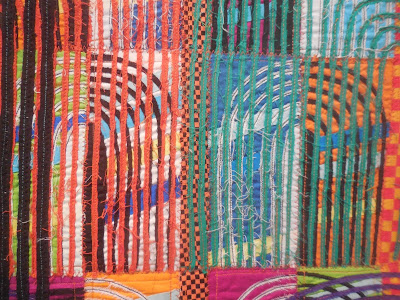 For many years Jane has been doing a daily collage, with cut-up magazines pasted into notebooks.  I first learned of her practice when she sat in the back seat of my car heading for Athens OH, cutting and pasting.  In fact, her daily collage was an inspiration to me to do the same thing for three years of daily art.

Jane has made photocopies of some of her collages and incorporated them as one layer in complex quilts that also include spirals and skinny lines. 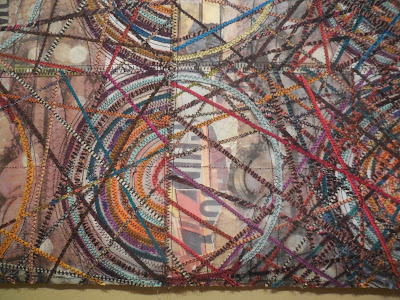 Although these quilts are very obviously in the same family as her other spirals, the background collages add an air of mystery and additional complication.  I particularly liked the very thin, illegible fragment of handwriting that appears in Day Journal. 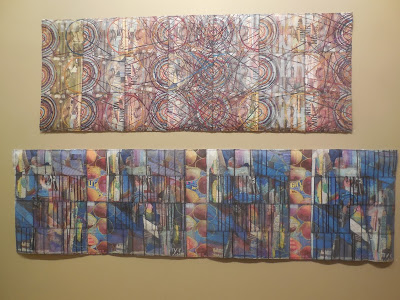 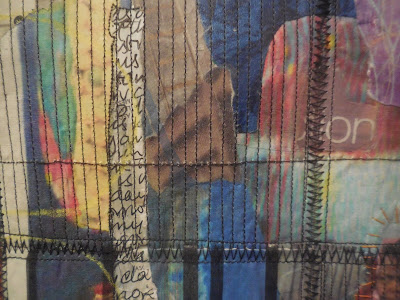 When you have known somebody well for many years, and become familiar with their work and their signature modus operandi, it's always nice to see then throw in a new twist.  I've always admired Jane's work, and it was great to see so much of it in person.

If you're in the Louisville area, check out the show.  Art of Color: A New Grasses Exhibit will be on view at the Portland Museum through May 19.