Sewing for the third generation

Yesterday I got to step up to the plate for Isaac's new Cub Scout uniform, which set his mom back more than $100 (!?!?!?!?!?!?) at the Scout store on Tuesday.  Cubs Scout pants have to be the only kids' pants still sold in the United States that come without hems; they're made six inches too long and somebody has to take them up.  I wonder how families without sewing grandmas deal with this challenge. 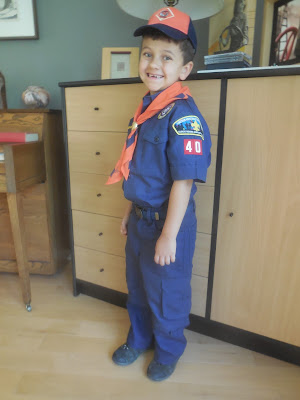 But I rose to the challenge, not only with hemming the pants but also sewing the troop number on the sleeve.  I was happy that the other patches, indicating the local Boy Scout Council as well as the American flag, came pre-sewed.  After years of mending only for big men, I had forgotten how small little boys' sleeves are and how hard it is to get your sewing machine in on those little numbers without inadvertently catching some other part of the garment in the seam.

I guess the Scouts still value those old traditional survival skills like sewing.  I wonder if they will instill them in the boys as well as demanding them of the moms and grandmas!