Two thousand years ago Rome seemed to be on its way to rule the entire world. Augustus Caesar, who had gained power in a civil war, wanted to be sure the formidable army did not turn on him, so he sent most of his troops to the far reaches of the empire, focused on conquest and defense of the borders and thus too busy and too distant to make trouble back at home. Among the places thus occupied was northern Germany, at least in the summertime. During the winter the legions pulled back across the Rhine to make camp, drink beer and weave little plastic keychains.

The Roman army always recruited men from the occupied territories and a gifted soldier could rise to considerable heights. One of these was Arminius, a young Germanic tribesman who commanded an auxiliary unit so well that he was not only given a nifty Roman name but made a Roman citizen.

In 9 AD, as the Romans were beginning their winter retreat, Arminius approached his commander, Varus, with a helpful suggestion. There’s this village with a bad attitude that we hear is planning a revolt. If we just marched a couple of kilometers over this other way, we could stomp them out on our way back to the river. Sounded like a plan to Varus, and so the legions took an unfamiliar route west through the Teutoburger Forest.

Which they did. Three legions worth of Romans – about 25,000 men – were annihilated, leaving only a handful of survivors. The defeat was so crushing that they retired the jerseys of the three legions; never again would there be an XVII, XIIX or XIX in the army. Augustus decided he didn’t really want to make a province out of Germania after all; not worth the trouble. (Sure enough, it was the barbarians from the north who eventually put paid to the Roman Empire.) And in the long run, that’s why northern Europe speaks Germanic languages, not Romance, and John F. Kennedy had to say “Ich bin ein Berliner” instead of “Ego Berlinus sum.”

If ever a battle could be called decisive, it’s this one, and in fact as German nationalism coalesced many centuries later, Arminius, or Hermann, as Martin Luther first called him, became a cultural hero. In the US, German immigrants formed a fraternal organization known as the Sons of Hermann and if you go to New Ulm, Minnesota, you can see a huge statue of Hermann. If you go to Hermann, Missouri, you can see a whole town.

So why am I telling you this? First, because it’s good to learn a little history every now and then. Second, because my husband the wannabe archaeologist has been fascinated with this story for years, ever since a British colonel stationed in northern Germany went out one day in 1989 to play with his metal detector and found the battlefield. Ken read about the find, then some books about the battle, and for years has wanted to make a pilgrimage to the site, which is at Kalkriese, near Osnabruck. And guess what – we did.

The museum was full of stuff excavated from the battlefield, as well as dioramas and other explanations of the ambush and how the Germanic tribes lived in those days. Not as much English information as an English-speaking visitor might want, but since Ken already knew a lot about the battle we were able to figure out what was going on. Out on the battlefield, we got to climb up a replica wall, hide behind brush and wait for Romans. If you’re at all interested in archaeology and find yourself in northern Germany it’s definitely worth a trip. 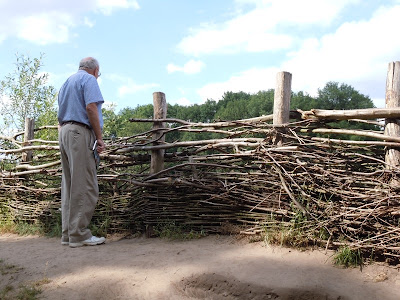 Just to make this art-related, a week later we were in Berlin visiting the Hamburger Bahnhof, the new museum of contemporary art, and found this huge woodcut/painting by Anselm Kiefer called “Wege der Weltweisheit: Die Hermanns-Schlacht” (The Ways of Worldly Wisdom: Hermann’s Battle). Kiefer is one of my favorite artists and it was special to see his take on “our” place. Here the Germans lurking in the dark forest, waiting to leap out and conquer the world, include Caspar David Friedrich, Richard Wagner and Immanuel Kant. 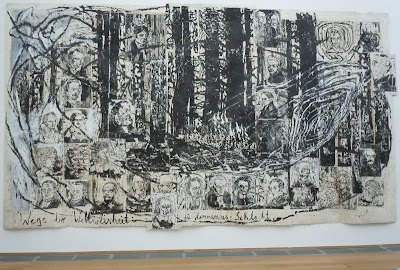 Posted by Kathleen Loomis at 6:24 AM