I had one of those triple-digit grocery runs the other day, during which I went up and down the aisles and contemplated what a busy and productive year the product police have been having. You know the product police – the guys who notice how much you like that brand of salsa and promptly remove it from the sales chain. It often takes me a while to accept the loss of my friends, so for several months I may check the shelves in a vain hope to find them back again.

So yesterday I checked, and sure enough, my salsa still wasn’t there. Neither was my cereal or my hair conditioner, or oil-packed tuna in a pouch. (Let’s don’t even think about what happened a couple of years ago to tuna in a can, which wasn’t discontinued but just made so crummy that I had to upgrade to the pouch in the first place.)

The same thing happened earlier this summer when I needed an emergency wardrobe update before embarking on a big trip. The product police had gotten to my favorite underwear and socks, on their way to pulling all remaining copies of the new shoes I had bought two weeks earlier and fallen in love with and wanted at least one more pair of.

The cops are at work in other areas, too, such as fiber art. Hear the pain of dyers who can no longer buy Prima muslin from Robert Kaufman. Many of us are still in mourning over the untimely death of Walmart black, a cotton that discharged to gray and white – and then, one day, they changed the formula and it went to red instead, just like all the other blacks on the market. Moving to higher-end merchandise, let’s cry for Bernina, which about five years ago decided their presser foot needed a new coupling device, meaning that the 20 specialty feet I had lovingly (and expensively) acquired over the years for my two older machines won’t fit on my newest one.

That’s not to mention the demise of our favorite retailers. Sewing types in my part of the Midwest still have a hard time accepting that Baer Fabrics is no longer in business in Louisville, nor is St. Teresa’s in Cincinnati. Online we’ve lost Web of Thread, and Carmenwarehouse changed hands and stopped being wonderful. I could go on and on – and I’m not even a shopaholic, way more a retailphobe if you must know.

What’s going on? Do manufacturers think we’re all airheads who won’t buy anything unless it’s new, new, new? When did brand loyalty get redefined to mean we should buy anything that says “My Favorite Brand,” even if it isn’t My Favorite Product any more?

We needed a bar of soap last month in Germany, so we dropped in at a small market and had a choice of three, count ’em, three different kinds! One of which turned out to be what we needed. Contrast that to your basic US store, where there would be three, count ‘em, three whole shelves of soap and it would take you five minutes to find the one you want, or more, because they changed half the products since the last time you bought soap.

Yes, US consumers have all the choice in the world, except if they want to buy the same salsa they bought last month. This has to be economically inefficient – all those R&D and advertising costs rolled in to your new kind of salsa, not to mention the administrative burden for the stores, the distributors, the guys who stock the shelves, all of whom have to phase out the old salsa, rearrange the warehouse and the shelves, make up new signs for the new salsa and explain to the unhappy customers that they’ve been screwed.

I hope my malaise isn’t just from getting old and crabby. I think it’s more basic than that, a symptom of what’s wrong with the US consumer economy – too focused on superficial glitz, too lacking in real substance and value. So I take perverse pleasure in mending the holes in my old favorite socks and hoarding my last three yards of Walmart black for the perfect bleach job at some future day.  And speaking of hoarding.... 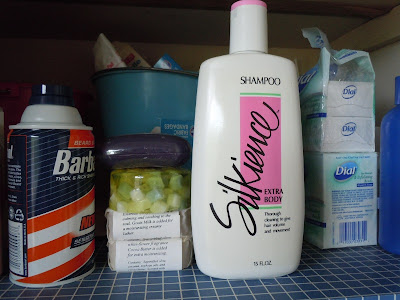 Silkience shampoo -- discontinued seven or eight years ago.  I found six bottles on a bottom shelf in Virginia shortly after it disappeared in my own stores, and bought them all.  This is the last one left. 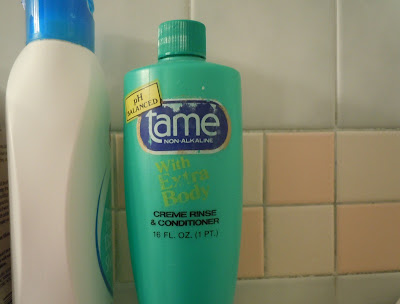 Tame creme rinse -- discontinued around 1990?  This is my last bottle, hoarded through the years, recently stretched with a little bit of water, and about one rinse away from eternity.