The last time we visited Berlin, almost 40 years ago, the cold war was in its full paranoid stage and the wall was an ugly presence slicing through the city. We had memories of clearing Checkpoint Charlie in a tour bus, complete with mirrors on wheels for the border guards to slide underneath cars to make sure nobody was clinging to the axles.

This time, two decades post-wall, we visited the Berlin Wall Memorial to see how Berliners have commemorated that sad chapter of history. A section of the wall and the surrounding neighborhood have been made into an outdoor memorial/museum area with excellent signage in German and English. A huge amount of information has been crammed into unobtrusive kiosks that stand in the former no-man’s land between the actual wall and the inner perimeter.

At this site the no-man’s land included a portion of a cemetery. In the day, most of the graves remained in place and mourners were still allowed to visit, but only with permits and under heavy armed guard. One of the kiosks played a clip from an East German training film that showed two vigilant soldiers patrolling the cemetery at night. Look! A man hiding behind a gravestone – sic the dogs on him! The dogs got him by the wrist, the guards ran over to arrest him! And so, the narrator intoned, a happy end to the story of another Western spy trying to infiltrate the communist paradise. (We laughed out loud.) 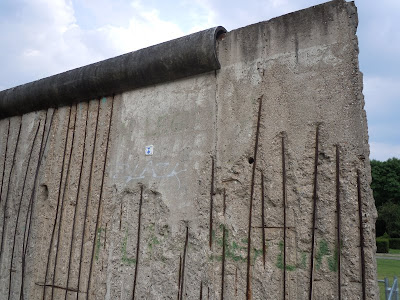 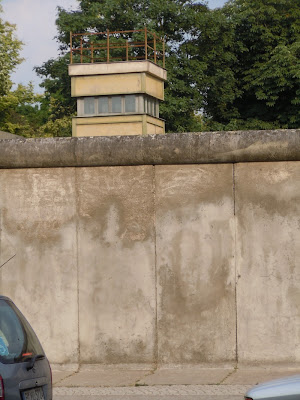 The area included some remaining sections of the wall and an old guard tower. But the highlight was a memorial with the names and photos of the 136 people who died at the wall. They ranged in age from two to over 90, although the majority, as you might expect, were young men with the physical strength and nerve to dare an escape.  Some were East German border guards who saw opportunities while on duty. 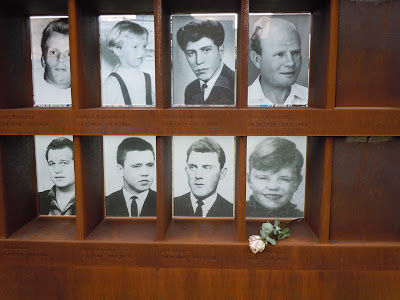 Throughout Berlin, at the site of the wall, you can find memorial kiosks with details, sometimes photos, of escape attempts, successful or unsuccessful. Because this particular area included a border crossing, there were many attempts noted on the kiosks and brochure.


Right across the street from the memorial area is an old subway station, one of the “ghost stations” where western trains continued to run through portions of East Berlin. These stations were closed, doors and exit shafts were filled with cement, and guards patrolled the empty platforms (no doubt to prevent spies from leaping off the trains to infiltrate the communist paradise).

Just to make this art-related, a couple of days later we saw this picture, made many decades earlier but strikingly evocative of the horrors that later were visited upon this beautiful city. 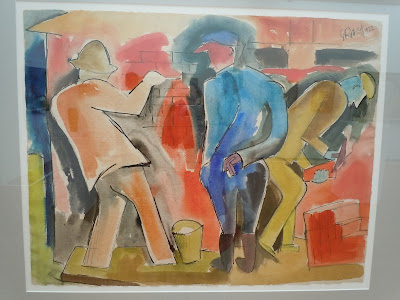