In preparation for my trip to Japan I contemplated what I really wanted to do in my discretionary time, besides walk around, take pictures and eat sushi. Decided that I would like to take a workshop in calligraphy, both because I love calligraphy and because it seemed there would be little language barrier. My wonderful hosts at Nihon Vogue arranged a class at Carre MOJI, a gallery specializing in calligraphy as art for interior design.

Ryoko and Hiroko, two of my Nihon Vogue friends, came with me for the class. I had been teaching all day, it took a while to get the students out the door and everything packed up, then we made a harried rush-hour traverse of Tokyo in a taxi and arrived at the gallery hot and frazzled. Inside, it was cool and calm and we were greeted with a cup of tea, then set up at a table, each with our own brush and sumi ink and a huge stack of paper. Life shifted into a new gear immediately. 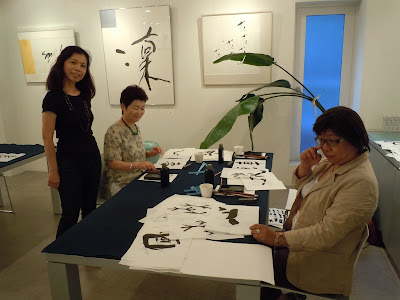 Our instructor, Kei Shimizu, had no English so she used the most basic method of pedagogy with me: she put the brush in my hand, then held the handle to guide my strokes. After “we” made a character a couple of times, I got to solo and make it again and again. After a while she would come back and teach a new character. 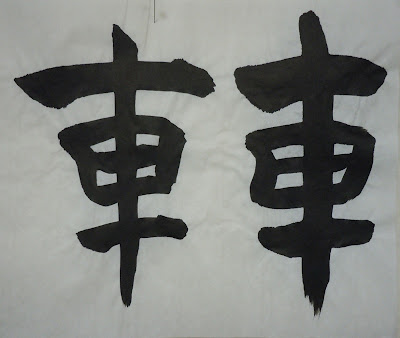 My art teacher at home, Laurie Doctor, told us once that when she began to study Japanese calligraphy she spent six months learning to put the brush down on the paper and six more months learning how to pick it up. That sounded slightly apocryphal and until now I had never really understood what she meant. Never having used a calligraphy brush before, I did not appreciate how the appearance of the strokes depends on exactly how the mass of the brush is mooshed onto the paper. For instance, you can lay it down kind of sideways with the tip of the brush making a little point at one end of the stroke, or crush it dramatically into the paper so the wide base of the brush makes a round, fat blob, or probably a hundred other variations that would make subtle differences in the look of the stroke.

Kei didn’t tell me this – I figured it out in the calm, quiet as I drew my characters over and over. Toward the end of the lesson I started making just one stroke rather than a whole character, trying to make the brush and the ink behave. Now and then a character or a stroke turned out particularly well, which made me inordinately pleased.  The best one on the page below, for instance, was the one at lower left. 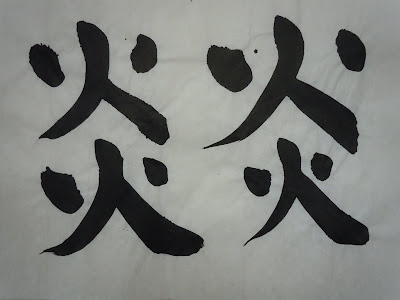 Ryoko and Hiroko, of course, were making beautiful characters seemingly without effort, although both told me they had not done calligraphy since childhood and did not consider themselves at all accomplished. But, they explained, they were writing whereas I was drawing – they knew the characters, how to make them and what they meant.

Imagine the reverse scenario – if someone from the remotest part of Japan, knowing no English, were to come here for a calligraphy workshop and sit next to you. Told to make a page full of Ws or Rs or Qs, you would pick up your pen or brush and do it automatically, perhaps thinking about how to make them more beautiful but not spending any time on whether you were making them correctly. But the Japanese visitor would be checking to make sure the bowl of the R points the right way and the swash on the Q starts at the right place in relation to the round bowl, and wondering whether the angle of the strokes in the W or the height of the tail of the R makes a difference to the meaning.

As we produced page after page after page of writing, the wet sheets were spread out on felt mats to dry and then stacked up. Kei riffled through our piles, picked out a couple that were especially well-done and had us sign them as art. 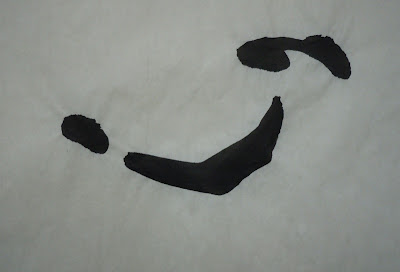 She picked this one, which means heart, as one of my two best characters. Although I know little about Japanese calligraphy I agreed that this one was good; the marks had character and substance.


Later I decided to practice several pages of the little stroke at the upper right. I think the best ones I made were the last two in the left column. 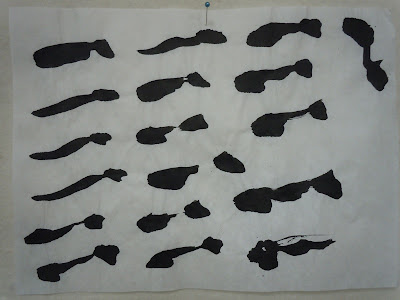 The second one Kei picked, however, did not strike me as particularly wonderful. 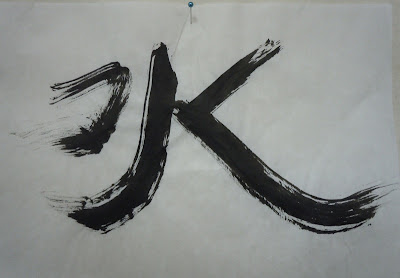 This character means water. We had been experimenting with dry brushes and I did like the way these strokes turned out. But I was not in love with the whole character. I realized why: to me, this was not an exotic foreign symbol with a mysterious meaning, it was just a K, my very own letter, and as Ks go, this one was nothing special. I had tried to see it as its own oriental self, but every time I drew it I found myself simply beginning my own signature, and all the magic disappeared. I was intrigued that Kei liked this one – I need to contemplate it more and try to figure out what made it good in her eyes. 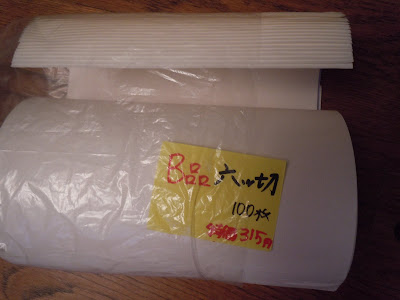 Later in the week I was visiting a calligraphy shop and bought a pack of 100 sheets of washi paper for an unbelievable 315 yen – under $4 – because they were seconds. I already own a calligraphy brush that I have never used, and sumi ink that I have, and I can probably find directions for drawing kanji characters on the internet. So this very morning I could make myself a cup of tea, go into the studio and re-enter that wonderful zen state where nothing counts but how you put down the brush.

Posted by Kathleen Loomis at 5:02 AM