Several years ago I had only begun taking classes from Nancy Crow and thus I was taken aback when she said to me that a certain seam was "all wrong" and needed to be redone.  The fix consisted of less than 1/8 inch.  My first response was "you're crazy" but as the day wore on I realized she was right, ripped out the seam and resewed it.

That day was a watershed in my transition from a talented amateur to a serious artist.  I had always subscribed to the mantra "good enough is not good enough" in my profession, but until that day I had not done so as an artist.  From then on I resolved that I would make things as good as I could in my art, even if that took time and effort.

Which is a long way to get to how I spent yesterday afternoon.

Several weeks ago I was well along on quilting a piece when I went to brush away a bit of what seemed to be black lint.  Oh, the klong when I realized that the lint was actually some kind of gooey foreign substance that left a spot on the pale yellow of my quilt!  Scrubbing it with a wet washcloth accomplished nothing.  My next plan was to put the quilt away and work on something else -- maybe the spot would disappear.  (I firmly believe that in the entire history of textile art this has actually happened at least once.) 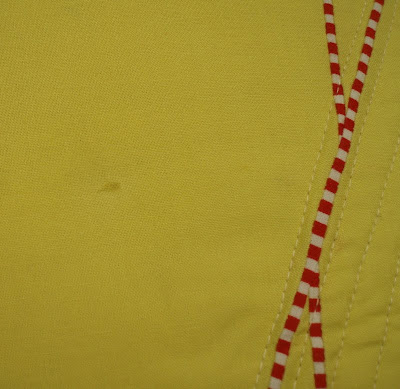 But when I came back after my world travels, the spot was still on the quilt, pale brown and about the size of a bit of short-grain rice.  It was in the unquilted portion, so it was relatively easy to fold back the batting and backing and scrub it with soap and a toothbrush, but the spot didn't yield.

In my pre-serious days I would have cussed a few times, then carefully planned my stitching to pass over the spot and hoped that it would be camouflaged from view.  I toyed with that idea for several days but this afternoon I realized that I just had to do the right thing, which of course was to cut the spot out and sew in new, clean fabric. 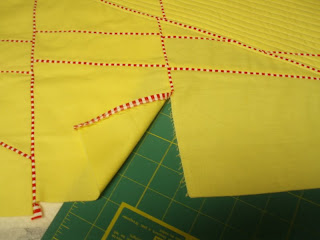 Rather than rip out any of the quilting, I decided to slice right through the spot and piece in another narrow strip of red-and-white striped fabric.  I opened a seam so the repair would be as small as possible.  I chose to slice the top parallel to a nearby strip so it looked like part of the original design (the ruler runs right through the spot). 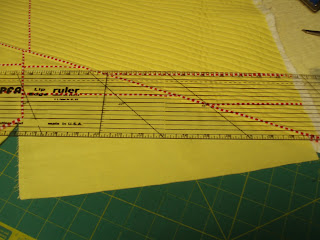 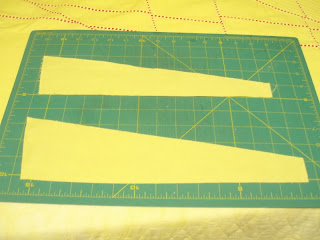 To make sure I had plenty of fabric for the mend, I cut a new piece of yellow fabric at the same angle as the original piece but an inch bigger in either direction.  Then I cut a new piece of stripes and stitched the new piece back into place.  It was cumbersome to fold the top away from the batting and backing, and to work so close to the huge bulk of the quilted portion, but with a lot of pins and patience everything worked. 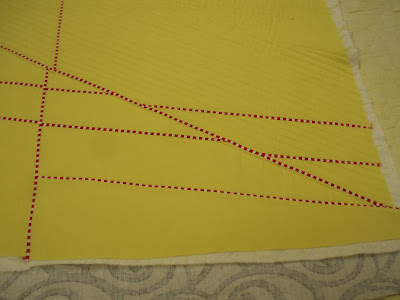 The "new" quilt has one more horizontal stripe in the corner but no spot.  The repair took less than an hour and I know that had I not done the right thing, I would have seen that spot every time I looked at the quilt for the rest of my life and regretted not fixing it.  Can't say whether I would have made the same decision had the spot appeared in the middle of a quilted section, but I'm so glad I was able to fix it with so little trouble.  Nancy would be proud of me.

PS -- note to self -- don't make any more quilts with wide expanses of plain, pale yellow.  It's like wearing a white dress to cook spaghetti.