I wondered at first about teaching a workshop entitled “piecing very fine lines,” which I did in Tokyo last week as part of my Quilts Japan Prize.

Would it appeal to anybody? Would there be enough substance to make people think they got their money’s worth? The technical issues can be covered in ten minutes, and we segue quickly into using people’s own designs without much guidance from me. I was happy to discover that the workshop attracted enough people to warrant a second session, and really happy to discover that the participants did beautiful things with the concept.

I wrote a couple of months ago about my anxiety to discover that many of the workshop participants apparently would want to piece by hand rather than by machine. I did figure out how to adapt the technique for hand-piecing, and sure enough, a few people did want to work this way. But as I had suspected, most of them realized the potential of the sewing machine; one or two even started by hand and switched to machine after one or two seams.

The workshop was equipped with Juki machines, one for every two participants. You probably know of Juki as a workhorse industrial machine; many quilters have long been enamored of its quality but you have to search around to find one, maybe used. Now the company has put out its first machine for the home market, and it’s a beauty. The company also provided two or three technicians for the workshop, to show people how to thread the machines and otherwise hold the hands of those who might be wary of the technology. If anybody walked into the room hesitant about machine piecing, they certainly had the opportunity to lose those doubts.

We had given minimal instructions on what fabric to bring, so in addition to solids many people had prints or stripes. I have worked almost exclusively with solids in my own fine-line quilts and it was fun to see the different effects that came from more adventurous fabric choices. 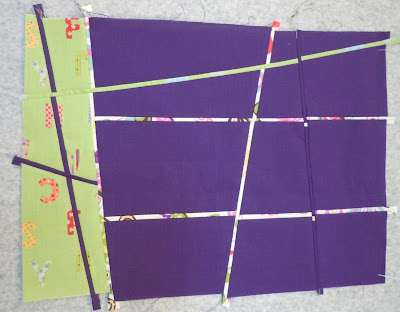 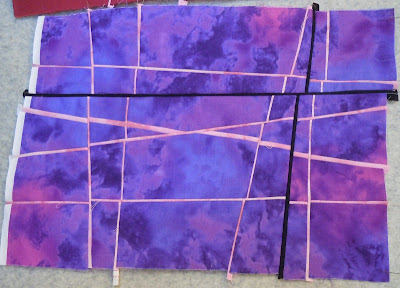 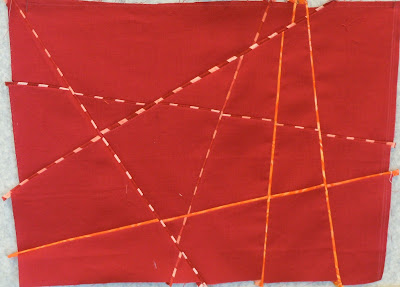 Because many of the workshop participants are teachers themselves, they were confident in striking out with the technique. (The workshop even included two former Quilt National artists, Harue Konishi and Chiaki Dosho.)  Here are several of the more ambitious pieces that were made in the six-hour class. I am sorry that I am unable to supply names with most of these photos, both because we did not have nametags and because the studies were pinned to the board anonymously. 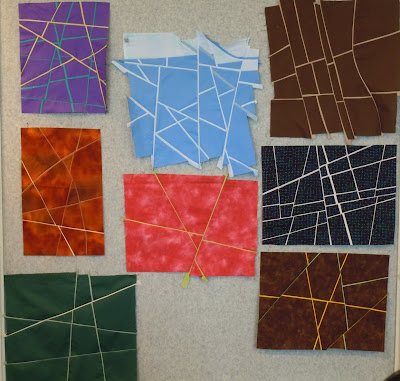 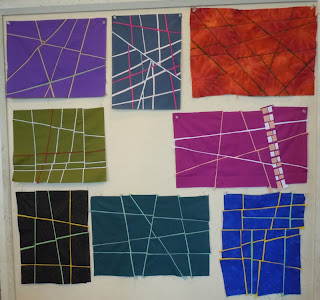 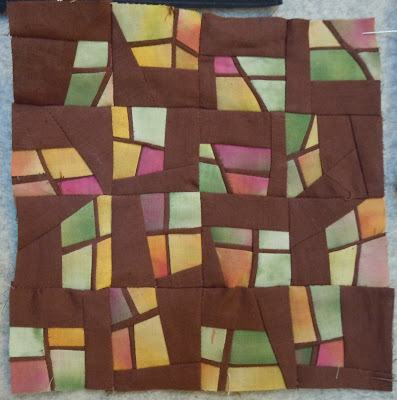 Above is one of Harue's pieces; in no time at all she had whipped out two very different, very complicated little studies. 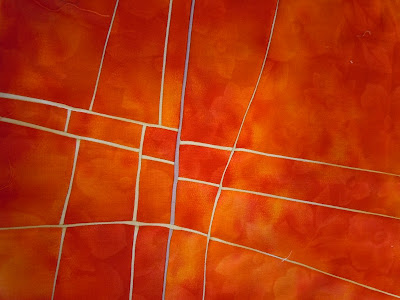 Here’s a piece that seemed quite Japanese in its feeling, thanks to the elegant lines and graceful curves – in fact, it made me think of a kanji character drawn with a very fine brush. I could see myself making a lot of these little “characters” and combining them into expanses of “text.” 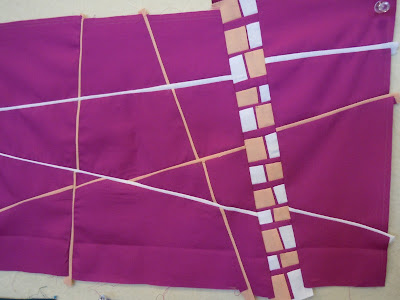 Here’s one where the plain vanilla web of fine lines was interrupted by a stripe of complex piecing.

In all, it seemed as though everybody had fun and made some lovely little studies.  I hope they will use the technique again in their work.  I also hope I have the chance to teach fine-line workshops again -- but next time, sewing machines only, thank you.