I wrote last month about several of the quilts in Creative Statements, the Ohio SAQA show now on display at the Zanesville Museum of Art.  As the juror for the show, I got to display a quilt too and I should show it to you, because it was so beautifully hung to bring out the best in it. 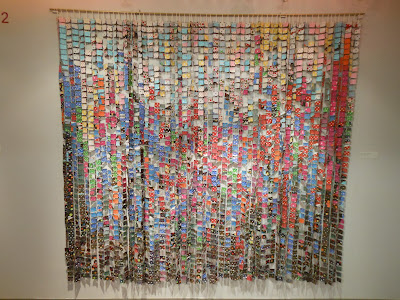 This is one of my postage stamp quilts, so called because it's really made up of thousands of little quilts the size of stamps, held together in a loose grid with machine stitching.  I asked the people at the museum if they could possibly hang it an inch out from the wall so the little pieces could cast shadows.  I had thought they would probably find a way to attach hooks to the ceiling and suspend the quilt out from the wall.  But instead, they got three or four little wooden blocks, painted them to match the walls, and fixed them behind the brass rod that the quilt hangs from to hold the rod out from the wall.

The shadows were particularly dramatic at the bottom of the quilt. 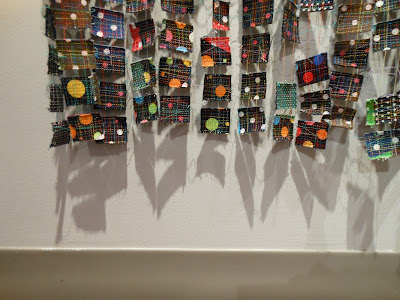 After you've gone a ways into a series of artworks -- this is the sixth large postage stamp quilt I've done -- you start to explore ways to do it differently than you did in the past.  My new twists this time were the use of polka dot fabric for the entire face of the quilt, and leaving occasional holes in the grid.

Both twists made me think of epidemics, such as the Black Death in Europe in the Middle Ages, where as much as half the population of some areas died.  The vacant spaces in the grid remind me of the people who died, and make me wonder how our society would respond if a pandemic wreaked similar havoc upon our people.  I hope we never have to find out.

Posted by Kathleen Loomis at 6:42 AM