I wrote early in the year about my daily art project for 2012: every day I hand-stitch a design onto a four-inch square of solid-color cotton.  A third of the way through the year already, and I'm pleased to report that I'm still having fun (the most important thing in a daily project, because it would be grim to have to slog through 240 days of something you don't enjoy, and equally grim to abandon your resolution).

Every time I do a daily art project I find that it takes a while to settle in.  I find new habits and techniques that become comfortable, and some of the things done in the first weeks of the year look awkward by comparison.  And more exciting, as the year goes by I often discover that I'm getting better in some ways.

When I did daily photographs as my project in 2010 and 2011, I discovered that my eye improved immensely just from the discipline of having to shoot SOMETHING.  I also learned more of the capabilities of my camera and figured out how to take pictures that were technically more difficult.

The big discovery this year is that I am becoming more adventurous in my stitching, especially in making pictures.  I've ranted in the past about how I can't draw, and therefore don't try to draw.  That's because my taste so far outstrips my capability that it's no fun.  But something about drawing with a needle instead of a pencil has freed me from the inner critic.  Of course it's crude when you're working with thread in a small space, especially if you use three strands of embroidery floss.  So how can I fault myself for crude drawings?

I also had a revelation earlier in the year when I attended a show and lecture by Tom Lundberg, an embroiderer who works really small.  After I came home from his show I was inspired to "draw" a flip-flop sandal as my daily production, since flip-flops are a favorite motif of his.

It looked pretty small in the middle of the square, so I added a frame, which made it look a lot more substantive (and finished.) 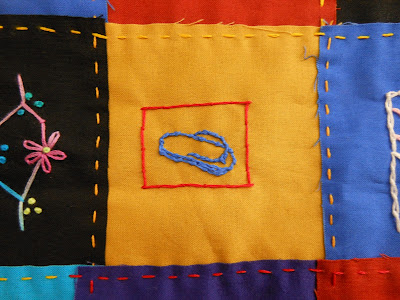 So that opened the door to a bunch of small drawings, usually framed. 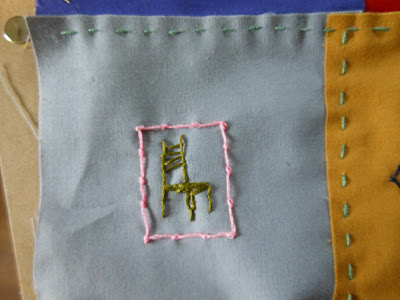 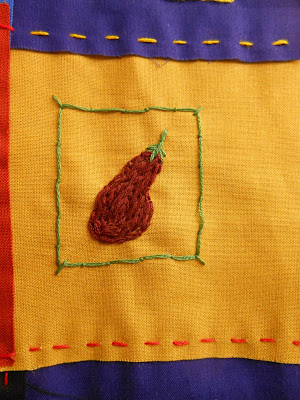 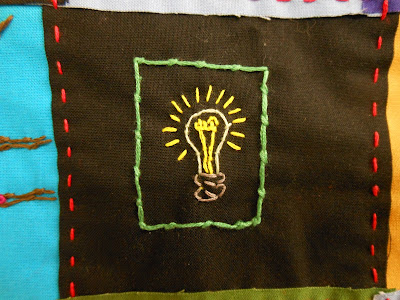 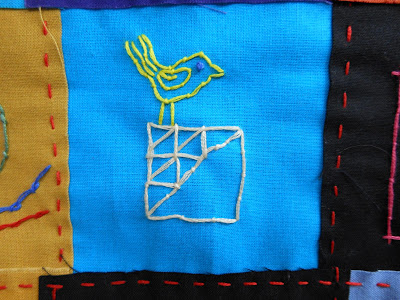 I'm quite proud of these drawings, pathetic though they might seem to people who draw naturally.  I take pride in not sketching or checking reference photos, which leads to some drawings that look very little like what they're supposed to, such as this white horse. 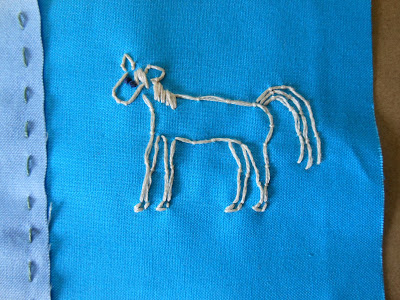 I'll tell you about some other things I've been doing in my project in a later post.
Posted by Kathleen Loomis at 6:40 AM