Good deed for the day

Maybe there are two kinds of people -- those whose tastes stay relatively unchanged over time, and those who move on as they get older.  I know I fall into the latter group in many areas, such as art and food, but in the former group in others such as politics, tableware and my husband.

Lots of potential topics for discussion there, but today I want to talk about tableware.

When I got my first job, fresh out of graduate school, my mother helped me go down to the department store and buy some decent dishes and silverware for my new kitchen.  I went with plain -- plain white dishes, plain stainless steel silverware.  When I got married four years later, my mother wisely advised me to get a lot more of both.  And 42 years later guess what -- I still love both patterns! 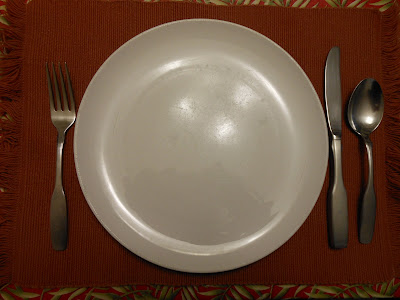 Over the years I have augmented the silverware to replace the pieces that disappeared or got eaten in the garbage disposal or kidnapped by aliens, because the pattern remains in stock (Paul Revere stainless, by Oneida).  But my dishes (Corning Centura Coupe) were discontinued decades ago.  I knew that there are companies that buy up old china and silver at garage and estate sales, and even had visited one such outfit, Replacements Ltd. in Greensboro NC.  But I didn't know exactly how many dishes I needed to fill out my supply, so I put off ordering.

I read in the New York Times on Saturday that the owner of Replacements Ltd. was the only business leader in North Carolina to put his company in opposition to the constitutional amendment prohibiting same-sex marriage.  That amendment passed by a huge margin earlier this month, proving that North Carolina's conservative social mores trump its business friendliness.  The story pointed out that many business leaders opposed the amendment personally but were afraid to do much to help defeat it.

After Replacements Ltd. donated $250,000 to the campaign to defeat the marriage inequality amendment, many of its customers mounted a boycott and the company is suffering financially.

After reading the story, I decided it was high time that I buy some new dinner plates.  I wasn't able to find my pattern by browsing the company website, so I sent an email -- and got a response on Sunday afternoon of a long weekend, which seems like a tipoff of good customer service.  And then I ordered 10 new plates, which will allow me to serve 18 people on big plates and almost 40 guests at a big party if half the guests eat from the smaller luncheon plates.

I'm considering this purchase a two-fer -- a long-overdue kitchen improvement, plus a political contribution to a courageous businessman who did the right thing even though it hurt.  If you have broken some dishes or lost some silverware over the years and never gotten around to buying new ones, perhaps you would like to do the same.


Posted by Kathleen Loomis at 6:42 AM