The entry deadline for Quilt National '13 is September 14 and many people like me are already starting to stress out.  Every even-numbered summer turns into a quilting frenzy as we try to make three excellent quilts to submit.  As of this past weekend I have finished piecing one of my three, with plenty of work ahead of me.

This is also the time when we QN junkies read over the rules again to make sure we're doing everything right.  QN is known for its picky rules, which have tripped up many a potential competitor.  For instance, at least some of the stitches must be visible from the back of the quilt, a rule that excludes at least one of my good friends.  Another rule says you cannot enter any work that has been in a US exhibit "that draws artists and/or visitors from more than 100 miles from its venue."  A lot of time has been spent trying to discern whether the state fair counts, or whether your local museum draws visitors from a certain distance, and does it count if your sister-in-law was in town from Spokane and came with you to check out the show?

But today I want to talk about the rule barring any quilt that has appeared on the internet, other than on the artist's own site.  One of my cyberfriends tells me that she had posted a QN-worthy quilt on her blog, whereupon somebody pinned the image to Pinterest, thus disqualifying the piece.  Yes, she checked with the QN people and yes, that was enough to rule it out.

At first glance it doesn't seem fair that the actions of a third party can blot your copybook, even if you did nothing "illegal" yourself.  But life isn't fair, and now that Pinterest has enabled and encouraged image grabbers everywhere to come out from under their rocks, anybody with QN aspirations has to be even more paranoid than in the past about posting photos.

So anybody out there who saw photos of my orange-and-pink quilt in progress and might be wondering what happened to it over the weekend will have to remain in suspense.  I will tell you that it did not turn out to be half a diptych, as I had been thinking about.  In search of that solution, I made two separate expanses of piecing, requiring many days of work, but neither one of them wanted to marry the orange-and-pink.  So I added several inches of piecing to the orange-and-pink, and will let it stand on its own. 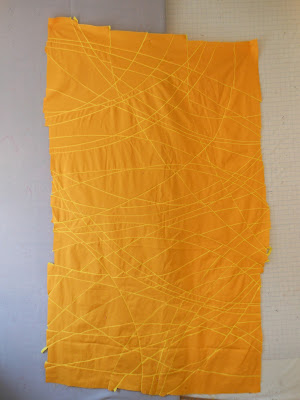 Meanwhile, one of the panels I made for orange-and-pink, now rejected, looked pretty perky and I didn't want to discard it.  Unfortunately it wasn't technically up to par.  This was my first attempt at fine-line piecing with curves, and I learned a lot in the course of making it -- but the parts I learned on weren't pretty  (look at all those wrinkles).  And even if it had been perfectly sewed, it wasn't good enough compositionally to stand on its own.

So I have sliced it into bits and will be reconstructing it.  And I won't show it to you on the internet until after the QN jurying, lest the images get hijacked and I go to jail.