Rats! I’ve been scooped! One of the highlights of our 15-museums-in-two-weeks tour of Germany last month was a monumental work by El Anatsui, one of my favorite artists, outside the Alte Nationalgalerie in Berlin. I was planning to tell you all about it as soon as I had some time to sit down at the computer and digest my notes and photos. But when the latest issue of Art in America appeared, here was the installation on the cover.  Or actually a detail shot, very much like this: 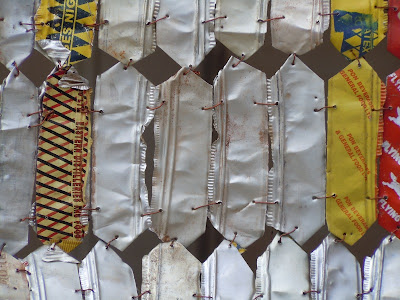 Unfortunately this was the special museum guide issue of AiA, so the cover art was not accompanied by an article. I would have loved to hear what they said about the exhibit, but not to be. You’ll have to settle for my comments.

El Anatsui is from Nigeria and started as a sculptor in wood, but in the last few years has become famous for his massive constructions that he calls “metal cloths” – small bits of post-consumer waste such as liquor bottle caps or evaporated milk cans wired together to make huge curtain-like expanses. His installations at the Venice Biennale in 2007 got a lot of publicity but I think I was aware of his work even before that. Although I missed his work in Kansas City last year in conjunction with the Surface Design Association meeting, I have seen his permanent installation at the St. Louis Art Museum and a small piece at the Metropolitan Museum in New York.

The installation in Berlin is part of a show featuring five prominent African artists whose works, not surprisingly in this context, comment on colonialism and its lasting effects on both sides of the relationship. Anatsui’s piece drapes the huge classical façade of the museum in metal detritus, contrasting the bold label “Der Deutschen Kunst” (German Art) with a barrier of junk. From a long view, it looks kind of like a big ratty T-shirt hung out to dry in the sun. 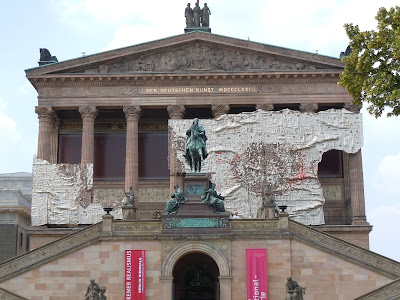 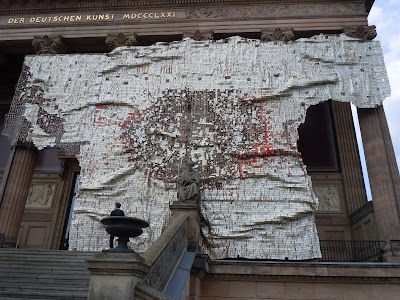 Being one who likes to go up close and see how things are made, I was delighted that the work was set off from visitors only by the gentlest of barriers, and I could get awesome close-up shots. They show how painstakingly the small bits of metal have been folded and wired. 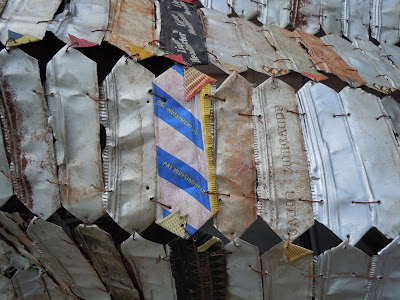 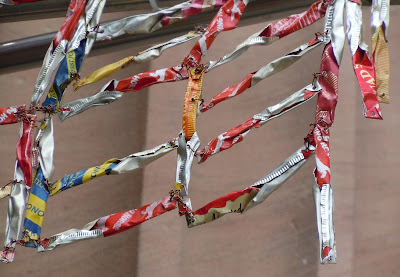 Indulge me in a little ego trip now as I point out the parallels between Anatsui’s work and my own – at least in my own mind. I like to think I’m following in his giant steps when I sew little rectangles of fabric into “postage” quilts like the ones in the right-hand margin of this page. I didn’t get my idea from him in the first place, but I have felt a kinship with his works for some time. In particular I admire the way his “cloths” don’t hang straight – they droop and bulge and are definitively 3-D, as you might expect from a sculptor. In the future I want to achieve this effect with my quilts.

But I digress. Anatsui’s work was magnificent in every way, including its vast scale. It was actually two huge expanses of hanging “metal cloth,” accompanied by a smaller piece that sat in a pile on the veranda. I thought the smaller piece was an afterthought, not sure what it added to the whole. But that’s nitpicking; the two big hangings were so powerful they had to overshadow everything in sight, including the building – and by extension, German Art – itself. 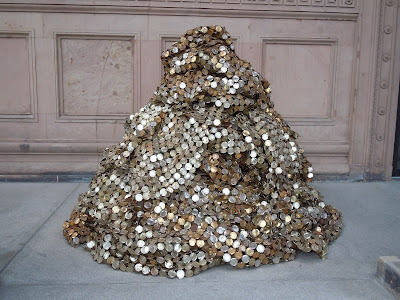 Posted by Kathleen Loomis at 4:57 PM