I wrote a few weeks ago about setbacks in making my annual Christmas ornaments.  I'm happy to report that Plan B turned out well, and as of this morning, all recipients of the 2010 ornaments have received their gifts.  So it's safe for me to post photos without ruining anybody's surprise. 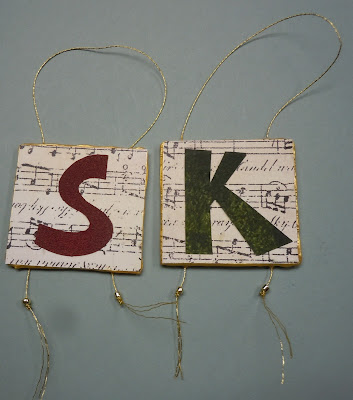 The rules of this tradition are that each ornament must include the recipient's name or initial, and the year.  This year's ornament is almost all paper, a change from my usual approach of using fiber.  I glued commercial scrapbooking paper in a music design onto thin wood blanks, then cut the initials and the date out of paper that I had painted with acrylics.  Over the years I've cut a lot of letters out of both fabric and paper, but until now, never with an X-acto knife.

I had a lot of fun with my cutting, and never drew any guidelines.  I generally cut from the back of the paper to keep the painted surface from getting nicks in it, and I think that working in reverse gave the letters an air of unexpected jauntiness that wouldn't have happened had I really seen what I was making. 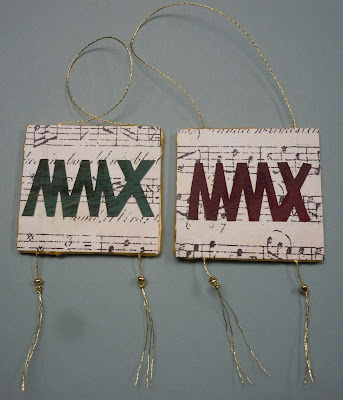 About those Roman numerals -- aside from MM, MMI and MMV, on which I missed the boat, this is the last year in my lifetime that I'll be able to get away with just three letters, so I thought I'd better carpe annum.  (Besides, it's easier to cut straight lines than curves, and I thought 2 would be especially difficult to render with a blade, 40 times, attractively.)

I inserted a gold hanging thread between the wood and the paper when I glued down the back side, and finished the edges with a bead of dimensional gold acrylic paint.

This year's material was new to my ornament repertoire, but I can't say the same for the typography.  I have been chagrined in the past to realize that one year's ornaments were riffing on the same theme as a previous year's, and oops, I just did it again!  I don't set out to copy myself, it just turns out that way.  Exhibits A and B: 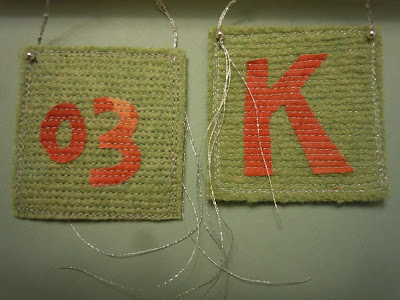 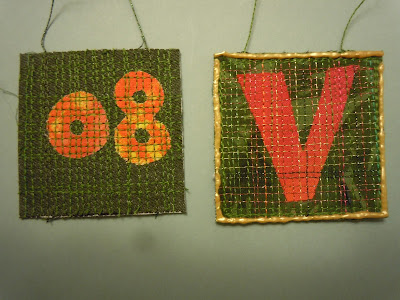 Oh well, at least the Roman numerals are original.

Posted by Kathleen Loomis at 9:58 AM