Naming your work -- unless you don't want to!!

I wrote earlier this month about naming your work, and speculated that artists who have a hard time doing it may be suffering from insufficient thought about what they're up to.  I suggested that an important part of the visual artist's job is to be able to articulate his own motives and concerns.  Deborah Stearns posted a long, interesting comment and asked whether it's really necessary for visual art to be intermediated with words -- aren't there situations where an artist would rather simply let the work speak for itself? 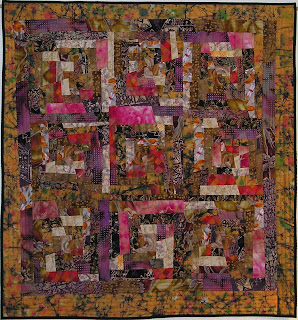 Log Rhythms 1  (the title may be better than the quilt)

A fascinating question, and one that forces me to look in the mirror a bit.  I was a word person long before I was an image person, making my living as a writer for decades before I retired and decided to be an artist in my second career.  As one who enjoys a facility with the written and spoken language, am I just being elitist comparing myself (favorably) to people who simply enjoy a facility with visual language?

Well, I hope not -- it's no fun being thought of as an elitist. But I did think about situations where world-class artists have chosen to zip their lips when it comes to naming their work.  I started, of course, with an expedition to Google.  That revealed many bits of advice on why you should title your work and many more bits of advice on how to title your work, mostly from people you never heard of.  The consensus among these advisors is that a title helps people understand what you're up to, and thus helps them form emotional bonds with the artwork, and thus makes them more likely to buy it.  But I also found some fascinating info on the use of titles through art history.

Old Masters' paintings often were given titles not by the artists but by the purchasers, or the art dealers who needed to identify the paintings for sale, or perhaps the scholars who later started keeping track of their body of work.  "Mona Lisa," for instance, came from one of Leonardo's biographers, but it's also known as "La Gioconda."

Presenting works of art as "Untitled" became a deliberate philosophical statement among some artists in the last century, especially Minimalists.  As I flip through my thin Taschen book on Minimal Art I find "Untitled" works by Dan Flavin, Robert Ryman, Richard Serra, Donald Judd, Robert Morris, Carl Andre and a couple of other artists I never heard of.  Here's a comment from the website of the Finnish National Gallery:

When an artwork is just labelled Untitled, does it imply that the artist’s treasurehouse of words is empty? Or can the lack of a title in itself be intentional and therefore meaningful? Some artists may not want to give any clues for interpretation, others can feel the title is unimportant.  Entitling works ’untitled’ has also been an extreme modernist phenomenon, part of an ideology of art which states that a work does not, and should not, point to any reality beyond itself. For example, a painting must only be a painting, addressing such issues as colour, form, texture and composition, and nothing more. According to this strategy, inventing a title for a painting leads the viewers’ imagination astray instead of leading them to focus on the essential, the painting’s intrinsic reality.

Jackson Pollock's wife, Lee Krasner, once said that he "used to give his pictures conventional titles... but now he simply numbers them. Numbers are neutral. They make people look at a picture for what it is -- pure painting."  A typical Pollock might be titled "Number 1, 1950 (Lavender Mist)", although arguably Lavender Mist is what people now call it, and Lavender Mist strongly resembles one of those tacky "conventional titles."

Some academic researchers have found that viewers get more pleasure out of paintings when they can deduce the artist's message, and that titling an abstract painting does make it more meaningful to viewers -- but not necessarily more pleasurable.  You may wonder how valuable it was to humanity for them to have reached these conclusions but that would be rude and beside the point.

So if Jackson Pollock wants to give his work deliberately meaningless names, who am I to tell him he can't or shouldn't?  But for those of us on much lower levels of the food chain, the title of a work may be a weapon in our arsenal of ways to get people to like the work and maybe even buy it.  One advisor even suggests that "Given two identical works of art, one titled "Untitled" and the other untitled, the one titled "Untitled" is worth more than the one that's untitled..... Given two identical untitled works of art, one with an explanation of why it's untitled and the other with no explanation, the one with the explanation is worth more and will sell for a higher price than the one without."

If this is true -- that viewers look to a title to help understand what the artist is trying to communicate -- then it is in every artist's interest to put that into the title.  And returning to my original point, if you don't know yourself what you're trying to communicate, it's going to be hard to come up with persuasive and appealing titles.
Posted by Kathleen Loomis at 6:49 AM