Several days ago I wrote about how few quilts deal with "dark thoughts," subject matter or emotions that are not nice, pretty, calm or cheerful, and suggested that perhaps our overwhelming focus on niceness keeps quilters from being seen as serious artists.  A late comment was added yesterday that makes me think more about the issue.

Deb wrote:  "Part of the problem with working dark subject as a quilt is the length of time one spends working with the thing. If I were angry or frightened or crazed enough with, say, being assaulted by a TSA pig at the airport (and I nearly am) I don't think I could stand putting in the necessary time from conception to promotion. I think very many people gravitate to quilt making for the personal gratification and comfort of the sensual input of working with cloth. I know I have, and many times keeping the principles of good art will slip away in favor of the mindless good times and instant feedback of making."

Deb is right on two big counts.  Quiltmaking is a time-consuming way to make art (although I suppose painters and sculptors can also take months on a single work) and that's a long time to live with an emotion like anger or sadness.  And quiltmaking is often used as personal therapy, a pleasant way to escape for a while from frustration.

I know as well as anybody how sitting down at the sewing machine can help sublimate the pain of a bad spell in life.  During one such spell two decades ago, the only thing I could do, night after night, was to sew tiny bits of fabric into two-and-a-half-inch squares, no thinking required.  Somehow sewing those little bits together made me think I was repairing the tears in my own life and slowly, slowly making things a little better.  Eventually I had thousands of squares, which became a quilt. 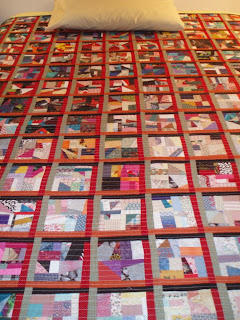 My Life in Pieces


In difficult times, it's probably good to be able to escape from your day-job dark thoughts into comforting, pretty quilting.  But on the other hand, sometimes it's better to confront your demons and exorcise them by putting them into your art.  Art therapists make a living helping people do that.  And artists too spend much of their lives confronting the bad things in life.

Imagine Shakespeare with only the comedies and no Hamlet, Picasso with only the guitars and no Guernica.  Our civilization would be lacking a bit, wouldn't it?

There may be some emotional difference between making art to exorcise your personal demons and making art to bear witness to problems in the overall society.  But I have ended up in tears while making my war quilts, even without knowing a fallen soldier personally.  If you don't want your studio time to be like that, then you should choose happier subjects -- and most quiltmakers do.

Yet quiltmakers are not all alike.  Some make art to confront the dark side, just as some people in every other medium do.  I do not want to suggest that those people are right and people who make cheerful quilts are wrong.  But I do want to suggest that if the establishment wants to encourage quilts to become part of the mainstream art world (and perhaps it doesn't) then it should be equally welcoming to quilts with dark subjects as it is to those full of sunshine.
Posted by Kathleen Loomis at 6:09 AM