Jane Dunnewold had a fascinating post on her blog yesterday in which she discusses different approaches to making art, and challenges us to see ourselves in each one.  Here are her categories:

Spontaneous: Throw anything at it and see what happens.

Tentative: Tries something out but can’t decide. Lives with it awhile and one of two things happens: Likes it so far; and continues, Or can’t decide; so it collects dust.

The Planner: Regularly diagrams, journals and plans. Thinks about color, makes lists. The planning is more fun than the execution, so no piece ever gets made. But some great journals come out of the process…

The Pragmatist: Uses what she has, right or wrong. Sometimes it works and sometimes it doesn’t, but at least she finishes things and stays within her budget.

The Collector: Constantly shopping and/or acquiring. Sees Big Ideas when she’s in the middle of a purchase, but nothing ever resolves. Loads of stuff in closets and under the bed.

The Worker Bee: Never didn’t finish anything. What starts as a sample must become a vest or a pillow. Everyone is in awe of how she gets it all done. The downfall? She never moves beyond samples into deeper work.

So where am I?  Right away, cross off The Planner.  I do think about my work a lot, especially between 2 and 3 a.m. when I'm too tired to get up but not tired enough to sleep.  But I rarely write it down and I don't do journals!!!  Cross off The Worker Bee, although I do occasionally make placemats out of projects that didn't quite stack up.

Spontaneous, yes, in that I often respond to ideas that land in my head from outer space.  (I believe, though, in the words of Louis Pasteur, that chance favors the prepared mind.)

Tentative, yes, in that I'm willing to put a stalled project on the side of the design wall and wait for it to talk to me; sometimes that takes years, but meanwhile I'm on to other things.  However, I usually find it easy to make decisions (Spontaneously) so this one doesn't come up too often. 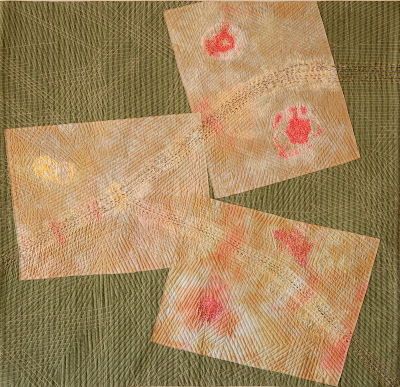 Call Me Tentative:
"War Zone 5: Road Junction"
I dyed the fabric in 2001 with the working
title of "Bombing Afghanistan."  It took
until 2007 to decide how to finish the quilt.

Pragmatic, yes, but not so much out of frugality as out of that Spontaneous desire to get on with it once an idea has landed.  I dislike shopping (well, maybe there is a bit of frugality in there) and often don't want to wait for a dye job, so I'll often work with what's around.  I do try to differentiate between right and wrong.

Probably I am most a Collector, although usually acquired rather than bought (see above, dislike of shopping).  I have a bazillion boxes and piles of things that I am very sure will come in handy someday.  However, a lot of things resolve from this stuff.  And while Collecting may be the most important aspect of my (bad) studio management, I don't think it's the most important aspect of my artistic process.

Jane's conclusion is that no matter what kind of style you favor, life will improve if you focus.  My conclusion is a little different -- whatever style you may favor, it has its pros and cons.  Collecting, for instance, is bad in that it wipes out your guestroom in a flash and may prevent you from walking directly from your sewing machine to your ironing board.  But it's good in that when you need a piece of fluoresecnt orange ribbon you probably have one (that is, if you can find it). 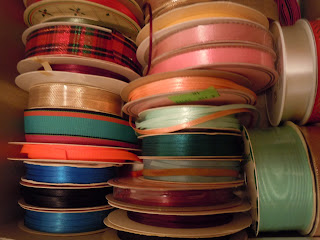 So I think you should challenge yourself to seize upon the good aspects of your style (or, more likely, styles) and overcome its downside.  Even before reading Jane's post, I had been contemplating whether I could or should take on a performance art project in which I would spend 15 minutes a day tidying up some part of my studio, and 15 more minutes making a little bit of art from something I found.  But would that make me too much of a Worker Bee, with 365 samples at the end of the year?
Posted by Kathleen Loomis at 6:14 AM