On a recent visit to the Speed Art Museum in Louisville, I saw a new piece by Sam Gilliam, the great Color Field painter who grew up in Louisville.  To clarify, it's new to the museum but made in 1968, at a critical time in Gilliam's career.  He was just on the verge of liberating canvas from the stretcher bars, as in this big draped work from the following year. 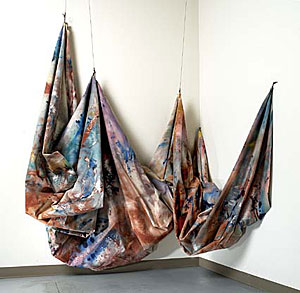 
But I'm ahead of myself.  In 1968, when he made "Restore," he was only halfway there.  Yes, he ended up with the canvas on a stretcher, but he started with it loose, and in fact painted it in a manner that is familiar to many of us fiber artists who manipulate fabric in dye. 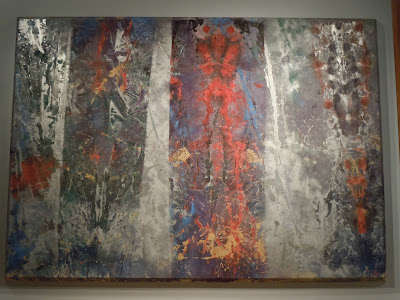 The wall sign at the Speed says:  "Building on his earlier experiments with folding rice paper, Gilliam applied color by pouring paint onto a sheet of unprimed, unstretched canvas, which was then folded in various places while the paint was wet.  Additional paint was applied as the artist continued to fold and refold the canvas, creating a layering of several surfaces.  Paint mixed with aluminum powder was applied at the end." 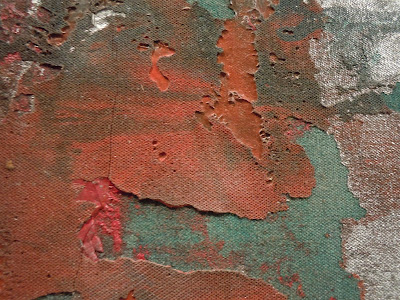 Because of the folding, the painting ended up with surface texture impossible to achieve working on an easel (unless you pressed another piece of canvas into the wet paint).

Definitely good enough to eat.
Posted by Kathleen Loomis at 6:00 AM