Alison Schwabe wrote in her blog this week about naming your work.  She had no kind words to say for people who ask their 2,500 nearest and dearest friends for suggestions on what to call their latest quilt or their new blog, and I tend to agree.  But it seems to me that this loss for words is not so much a sign of mental laziness as a deeper problem of artistic motivation.

Some artists make work out of divine inspiration, or another source that springs directly to their heads without any intermediate thought process.  They show up in the studio one morning, and find themselves painting sunflowers or whatever, and can't tell you why they did so.  I don't want to sound like I disbelieve this -- I'm sure many fine works of art came about this way -- but I do think that in most cases intermediate thought improves the quality of the art.

Perhaps because I spent my entire life living by the written word, I believe passionately that you should be able to tell people what you're doing and why you're doing it, and if you can't, you probably ought to clean up your act.  I am impatient with people who can't write an artist statement, not with the part about actually writing it, but with the part about knowing what it is they want to say.

I do believe that sometimes you make the work first, before you realize what it is you're saying.  That happened to me once in a Nancy Crow workshop when we were asked to piece a whole lot of strip sets, then combine them into a pleasing composition.  I made a huge, quite attractive composition during the workshop, which I have never quilted up, but then when I went home immediately made two more pieces using the same "recipe."  In fact, they're fraternal twins -- most of the strip sets show up in both pieces.  Those two pieces have had quite a pleasant life out in public: one toured for a year with a Husqvarna-sponsored exhibit and both have been exhibited several times. 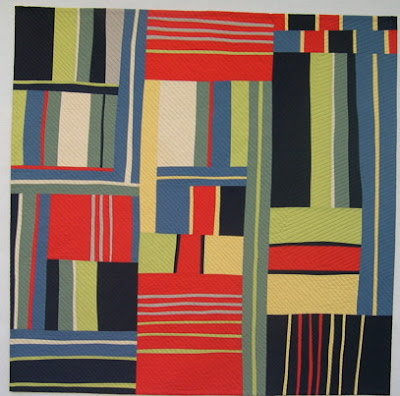 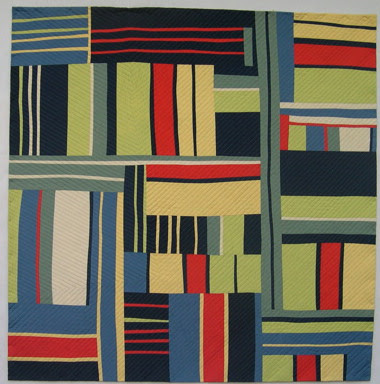 It wasn't until after I made the two pieces, however, that I realized what they were about.  Now I think they are about newspaper layout, the field in which my father was a world-renowned expert.  My artist statement reads, "This quilt represents a newspaper.  The recurring color patterns represent the stories that appear over and over: war, commerce, science, all variations of human joy and sorrow.  Just as we have read these stories before and will read them again, we have used these colors before and we will use tham again."

Before I articulated what the quilts were about, I liked them for their formal qualities of composition, balance and color.  But after I realized their "message," I liked them a lot more; I could name them and they were ready to go out in public.

By contrast, I think many quilters (and perhaps artists in other mediums too, although I don't participate in discussions with them enough to know) never realize what their works are about.  Many years ago I had some correspondence with a quilter who had considerable recognition, having been in Quilt National a couple of times, but complained about not being able to write a good artist statement. I liked his work and thought I would do a good deed and help him out.  But as we wrote back and forth, he never could get past the point of "I have no idea why I do these things, they just happen."  And he was proud of it, as though not being able to identify your intent made you a better artist!

In that case, the work was quite good, and I thought it was too bad the guy couldn't take that final step and tell us what he was trying to accomplish.  In many other cases, however, I am quite willing to believe that the artists have no idea what they're doing.  If they were to tell the truth, the artist statements would probably read "This was an assignment in my workshop with _____" or "I took a nice picture of my garden last summer and thought it would make a pretty quilt."  At least they have the self-awareness to realize that neither of those sentences would look very good in an exhibit catalog.

But if you don't know what you're trying to say, not only do you have a hard time with an artist statement, you may have a hard time even with a title.  Many people who make pretty quilts search for "pretty" titles that sound like excerpts from really bad poems.  And if that's all you're about, then do whatever you like.  But if you are a serious artist I think you should be thinking more deeply about what you are trying to say, and when you figure that out, it will be a lot easier to give names to your pieces.  And maybe it will even be easier to make good work in the first place.
Posted by Kathleen Loomis at 6:34 AM