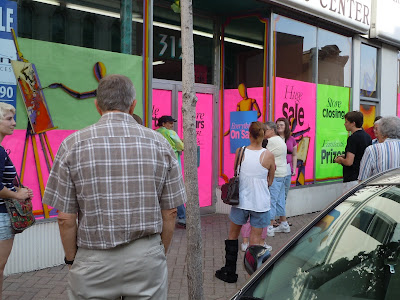 Yesterday was the first day of the big sale at our local art supply store, which is closing one of its locations and getting rid of everything, including the shelves.  We got there a few minutes before the doors opened and by a quarter after, the store was so crowded you could barely turn around.  People who had picked up a big tablet of drawing paper or some stretched canvases were in danger of knocking other people over if they turned incautiously.  Had one-tenth of these people regularly showed up to buy things, the store probably wouldn't be closing.

I hadn't thought I needed much, but found all kinds of goodies as I went around the store.  Watercolor paper, press-on type, canvases, a pointed Japanese brush, Sumi ink, walnut ink, india ink, Dye-na-flow ink.  I think this shopping trip may be a message from the art gods telling me to work on calligraphy for a while instead of quilts.

Lots of art teachers in the crowd; even if you didn't know them, you could tell because they were buying construction paper and crayons as well as tempera paint in very large bottles.  A surprising number of easels were going out the door, and practically everybody picked up a couple of pens and a sketchbook as the long checkout lines approached the counter past the small-stuff shelves. 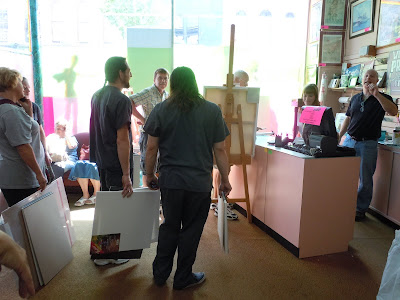 It's always sad when a beloved store goes out of business; at least this one will still have a large store on the other side of town, actually within walking distance for me (as long as I don't buy too much stuff to shlep home).

A couple of years ago our world's greatest fabric store went out of business totally, dead as a doornail.  Their going-out-of-business sale lasted for weeks, with the remaining stuff getting cheaper and cheaper.  I went back a couple of times to pick over the carcass, each time getting more and more melancholy to see the stock shrinking, the few remaining bolts moved forlornly into one corner of the showroom, the salesclerks tired and grim.

The store still sits there, signs and window cards intact, without a tenant, mocking us as we drive by.  How many times have we fabric aficionadas known exactly where to find exactly what we need -- and then realized Baer's isn't there any more.  I guess you can find anything you need on the internet, but how about the things you don't know you need until you see them?  And how about the things you don't know if you need until you feel the goods?

Some of the things I bought yesterday were like that.  The checkout line stalled for a while as I was in front of the small drawing tablets.  I saw a couple of tiny pads for $1.57 each.  My first thought was that they were absolutely darling.  My second thought was that I wouldn't do anything with them if I bought them.  The line didn't move.  My third thought was of a daily art project that I could do in just that size of page.  Maybe I'll start on that one tomorrow.

Posted by Kathleen Loomis at 6:10 AM