After I wrote a few posts recently about Modern Quilting, one of my friends tipped me off to an article in the current Quilter's Newsletter Magazine, which I had not seen, on the same subject.  And she said, "If you do read it, I hope to read a discussion about it on your blog."

Not wanting to disappoint, I will do as she asked. 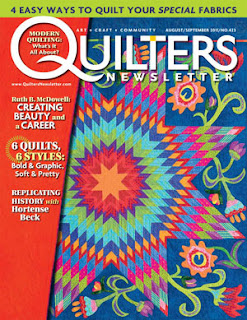 The QNM article, by Mary Kate Karr-Petras, grapples with some of the same issues I've been writing about -- how to define Modern Quilting, and why it is so popular among younger people.  She points to fabric choice as the key difference between Modern Quilters and Non-Modern Quilters -- "In contrast to reproductions and country-inspired calicoes popular through the 1990s, modern quilters gravitate to large-scale, home decor-inspired prints..."

And she identifies the internet as the "most important venue" of Modern Quilting, with bloggers and photo-sharing sites allowing people to make friends and be influenced by trends.  Only after some years of such online activity did Modern Quilters start to organize physical meetings and guilds, but there are now more than 100 chapters of the Modern Quilt Guild.

Karr-Petras alerts us to a big hoohah that occurred this spring when a blogger, Sandi Walton, posted a rant about Modern Quilting.  Walton was peeved because another blog said pinwheel blocks were challenging for intermediate to advanced quilters.  Walton begged to differ, they were actually quite simple.  But she intemperately titled her post "The dumbing-down of quilting," which predictably offended many people who did not bother to read the post, and some who did read it.

I am fascinated by the whole Modern Quilting movement, which I confess I didn't even know existed until a few weeks ago, and by the hoohah that got so many people hot under the collar.  I'm happy that apparently there are thousands of new, younger quilters out there becoming as enthralled by the magic of quilts as many of us old ladies have been for years.  I'm happy that so many entrepreneurs have found niches in this market, selling books, patterns, fabric and stuff to the new folks -- because money oils the wheels that also bring things to Unmodern Quilters like me.  But I too hope that the movement isn't dumbing down the pastime I love so much.

I was struck by some of the comments that were left on Walton's blog, because they seem to reinforce what I suspected already: that a lot of Modern Quilting boils down to We Don't Want to Hang Out With Old Ladies.  And from the evidence, I can't say I blame them.

Let me quote some of them:

Melinda:  "As someone who is new to the sewing community I find the quilting community very unfriendly to newbies. I sew for fun, not for the competition of it. I don’t care to be chided into developing new skills."

Kaye:  "We get snubbed all the time both on the internet and (most especially) in the "real world" ... Many of us are forming guilds so that we can have those relationships locally too, but unfortunately it isn't easy, especially when people are looking down their noses at you."

Amy:  "Someday I'll go to a class, or a quilt retreat, and maybe someday I'll have the time to shop for fabric without a grouchy sales lady rolling her eyes at my toddler.  But now I'm busy with more important things, and I love the simple quilts and the pretty pictures."

Wendy:  "What gets aggravating is going into my local quilt shop for some advice or help and getting sneered at because I'm doing the 'simple' blocks.  Yes, I'm doing 'simple' blocks because I like them. I like the more modern look.  I don't care to take the classes at my LQS to learn 'harder techniques' because the blocks and quilts they are making are ugly to me.  I don't criticize their quilts because I respect their taste, just wish they respected mine."

By happenstance, I wrote recently about local quilt and art stores going out of business, and how that strikes many of us as unfortunate.  But if local stores really treat the young quilters this badly, they are asking for their own demise.
Posted by Kathleen Loomis at 6:42 AM