I wrote last month about a series of quilts that I started about five years ago in workshops, most of which are still unfinished, and commented that they would probably stay that way.  My work has progressed and I'd rather spend time on my newer ideas than step back in time to revisit and complete these older ones.

One of the comments left on my blog said, "something about the brown and black one speaks to me. Funny because I'm much more of a blue person than a brown/black person. So don't throw it away. You can always send it to me. VBG"

I got a VBG out of that too, but as the day wore on I thought more and more, well, why not?  I'm not going to do anything with it, and besides, I could call it a collaboration, which has been one of my concerns this year.  (I've resolved to do 11 collaborative projects in 2011, and have so far completed seven.) 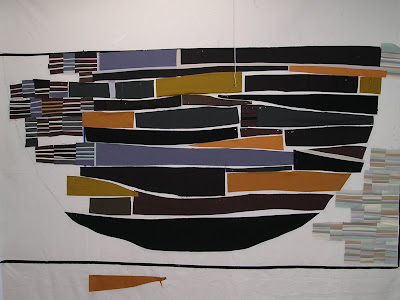 So I tracked back the person who had left the comment and checked her out -- it was Norma Schlager, who is an accomplished quilter, with enough experience and skill to handle the tricky cuts and piecing of this project.  The complexity and difficulty of the piecing had been a major reason why I hadn't finished the piece in the first place -- not that I couldn't do it, but it was going to take a l-o-n-g time -- and I didn't want to dump this daunting project onto a beginner.

But I was delighted to dump it on Norma -- I mean, pass along this lovely work in progress to somebody else who might love it too.  And finish it!  I told her that she had to do something with it, but not necessarily finish it to my plan, and she had to keep me posted and let me write about it.

Step one: I packed it up and sent it to her.

Side note:  Norma sent me an email with the subject line "Brown Planet has landed!"  And it went directly to my spam folder, with a helpful note from Microsoft that I had received what looked to be a phishing message.  As we replied and replied back, without changing the subject line, it continued to be suspect.  Was it the exclamation point?  Or is Brown Planet some kind of secret hacker password?  We'll never know.

Posted by Kathleen Loomis at 7:06 AM