We've just finished week 34 of the year, which means I'm two-thirds of the way through my package project: each week I make at least one package or bundle of things that I find lying around.  Finding stuff lying around is generally not a problem, since I'm a pack rat, but making up the package requires a bit of imagination.

In a few weeks I've made only one package, the minimum required by the rules.  In other weeks, when I'm puttering around the studio trying to clean up or find something, I'll make a half-dozen or more.  Here's a peek at some of my better packages.

No surprise that much of my stuff lying around has to do with fabric.  I quilted eight pieces in June and July and had lots of pieces of batting left over, generally in strips that were trimmed off after quilting.  There's not a lot you can do to make one bundle of batting look different from the next, but I tried.  The one in the front, for instance, is embellished with some little tiles that my friend saved out for me when she remodeled her bathroom. 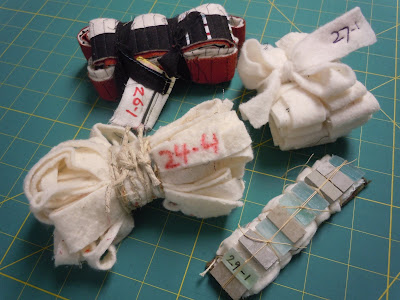 When I finish my quilts, I use bleach to write my name, the quilt title and the year on the sleeve.  Then they have to be laundered to wash out the bleach, which gives me lots of raveled clots of threads.  Here's a little bundle of the leftovers, which have always seemed quite beautiful. 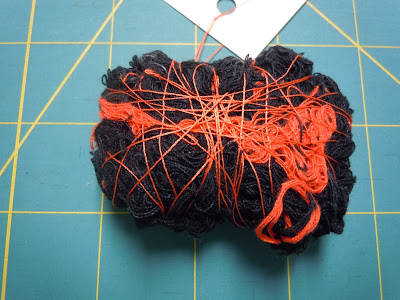 Bits of fringe from an upholstery sample book. 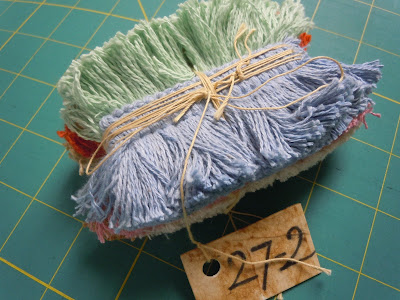 An old videotape case, minus the innards and stuffed with bits of fabric. 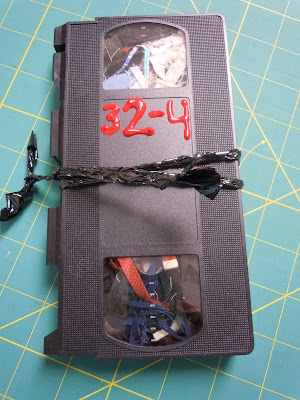 Finally, here's a bundle of yards and yards of cord made on a pin knitting device.  I started this cord when I was in high school and have been shlepping it around for many decades, occasionally adding a foot or two from leftover yarn.  I once planned to coil it into a cushion or mat, but the colors didn't really go together so I never did.  I realized that it will never look as good as it does right now, tied into a bundle. 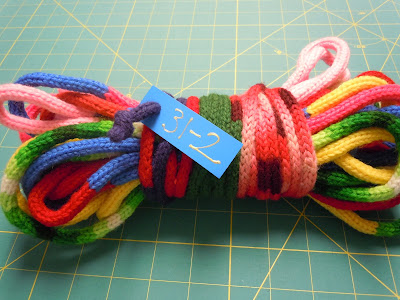 Tomorrow I'll show you some more of my packages.

Posted by Kathleen Loomis at 6:15 AM