Many years ago I bought a pair of small Fiskars scissors, which have been my favorite for small tasks.  I wear them around my neck on a cord whenever I sew, so I don't have to search for a scissors to clip a thread or little bit of fabric.  I acquired a twin pair from a friend who was liquidating her studio.

At some point I realized that both pairs were starting to lose their edge and tried to get replacements, but the product police were onto me.  The scissors I loved were gone.  I bought a similar model but it was like the poor country cousin -- smaller finger holes, a clunkier mechanism, matte finish plastic instead of shiny -- it cut things, yes, but it wasn't My Favorite.

The other day I was in the fabric store and found what looked to be almost the twin of My Favorite!  Had the product police been temporarily off duty in a government shutdown, just like the FAA?  And they were on sale for 50% off, so I bought two pairs. 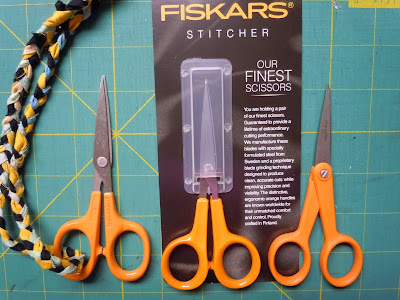 on the left, My Favorite; on the right, the poor country cousin; in the middle, the new ones

The good news is that almost everything does seem to be exactly like My Favorite, the bad news is they've made the finger holes smaller.  Perhaps the product police have persuaded Fiskars that people are getting skinnier, contrary to all evidence.  I hope I will love the new pair almost as much as I love My Favorite.
Posted by Kathleen Loomis at 6:10 AM