Hans Haacke, born in Germany in 1936, is a sculptor, a conceptual artist, and one who has done a great deal of "institutional critique," artwork that deals with the practices of museums and galleries.  His 25-year-old commentary seems prescient. 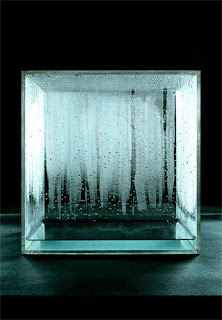 The art world as a whole, and museums in particular, belong to what has aptly been called the "consciousness industry." ... I believe the use of the term "industry" for the entire range of activities of those who are employed or working on a freelance basis in the art field has a salutary effect.  With one stroke that term cuts through the romantic clouds that envelop the often misleading and mythical notions widely held about the production, distribution, and consumption of art.  Artists, as much as galleries, museums, and journalists (not excluding art historians), hesitate to discuss the industrial aspect of their activities.  An unequivocal acknowledgement might endanger the cherished romantic ideas with which most art world participants enter the field, and which still sustain them emotionally today.  Supplanting the traditional bohemian image of the art world with that of a business operation could also negatively aggect the marketability of its products and interfere with fundraising efforts.  Those who in fact plan and execute industrial strategies tend, whether by inclination or need, to mystify art and conceal its industrial aspects and often fall for their own propaganda. ...

On the other hand, a new breed has recently appeared on the industrial landscape: the arts managers.  Trained by prestigious business schools, they are convinced that art can and should be managed like the production and marketing of other goods.  They make no apologies and have few romantic hang-ups.  They do not blush in assessing the receptivity and potential development of an audience for their product. As a natural part of their education, they are conversant with budgeting, investment, and price-setting strategies. ...

It is to be expected that the lack of delusions and aspirations among the new art administrators will have a noticeable impact on the state of the industry.  Being trained primarily as technocrats, they are less likely to have an emotional attachment to the peculiar nature of the product they are promoting.  And this attitude, in turn, will have an effect on the type of products we will soon begin to see. ...

Through naivete, need, or addiction to corporate financing, museums are not on the slippery road to becoming public relations agents for the interests of big business and its ideological allies.  The adjustments that museums make in the selection and promotion of works for exhibition and in the way they present them create a climate that supports prevailing distributions of power and capital and persuades the populace that the status quo is the natural and best order of things.  Rather than sponsoring intelligent, critical awareness, museums thus tend to foster appeasement.

Kathy comments:  It's true in our little quilt world, too.  Think of all the pretty, sentimental, safe quilts on display in Paducah, which draws five times as many visitors in one week than Quilt National does all summer.  Paducah, the show that wouldn't jury in a quilt by the previous year's best-in-show winner because it had to do with AIDS, lest the vendors and audiences be upset.