I took a road trip recently to deliver a carload of work for a show, and was happy to have a friend ride along for company.  During our several hours of conversation I told her how I enabled my son and his fiancee to get married.  They had been engaged for a long time but she confessed that she was so busy at work and the thought of organizing a wedding was so daunting she couldn't deal with it.  Her mother had died a few years back and there were no other female relatives to help.

So I ended up organizing the wedding (and holding it in my living room), a delightful task that mothers of sons don't expect to do.  My friend, who had organized her daughter's wedding at about the same time, marveled that I seemed so nonchalant about it, and that the whole thing got pulled together in two months.  (Heck, that was leisurely -- I did my own wedding in six weeks.)

Later she commented that it was funny to contrast my work, meticulous and controlled, with my real-life personality, nonchalant to the extreme, and speculated that all my control-freak qualities must find their outlet in my work.

It's always revealing to hear what other people think about you, and I was kind of surprised to hear her describe my work as controlled.  I see it as meticulous, yes, but controlled no.  I've never sketched things out in advance; I'm too much in a hurry to start sewing.  In fact, I often have to rip out seams because the first iteration turned out to be wrong.  But that's OK -- I'd much rather rip out the occasional seam than lose the excitement of seizing the moment of initial enthusiasm.  Spontaneity and creativity are inseparable for me. 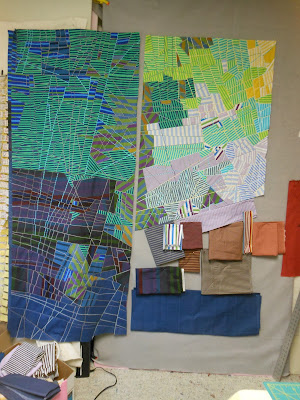 Here's what my design wall looks like this week, the second and third panels of my work-in-progress.  Panel three was going to have both cool and warm colors, but after I sewed and sewed and sewed on the cool -- they were looking so beautiful I just wanted to do more and more -- I was more than halfway done and there didn't seem to be enough room left to properly transition into the reds.  So I'm auditioning fabrics to keep it cool throughout -- well, maybe some brown/red in the bottom corner.

Still haven't figured out what will happen in panel four since my vague plan seems to have run off the rails.  Maybe I'll keep that panel cool also.  Maybe I'll add a fifth panel.  Maybe I'll order another carload of stuff from Fabric.com, which is advertising a special on stripes this week, and the quilt will end up having ten panels.  Of course, the minute I get beyond three the piece outgrows Quilt National, and I have no idea what kind of venue will accept something vastly bigger.

I'll worry about all that when I get there.  Not exactly the thought processes of a control freak.
Posted by Kathleen Loomis at 7:29 AM