I wrote earlier this week about how I got started on my collaborative piece by echoing the stitches that the first artist had made.  But while I was working on that, I kept thinking about another element of the work: its title.  The artist who began a work was asked to suggest a title, which the second artist was not bound to retain, but it did perhaps give a hint as to what the piece started out to be.

The title on this work was "The one who holds everything in its hands."  Now what do you suppose that means?

One reading suggested that the shape was indeed a raccoon, but remember, I had firmly rejected that reading, so I had to think of the phrase in relation to the pencil.  After much stewing and fretting, I finally decided that I could think of some kind of Supreme Artist who, using a pencil and other tools, draws or otherwise pictures the world around her.  I decided to mirror the pencil shape with a second pencil, which was "drawing the streets."  This was done in machine stitching on a separate panel that was almost the exact color of the pegboard. 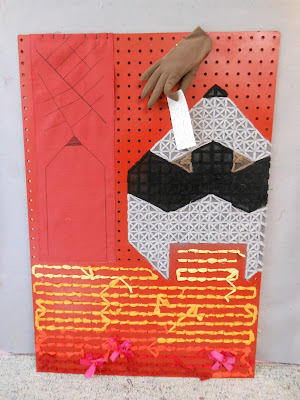 I also made a hand, since the mystery phrase had to do with hands, and let it hold a slip of paper with some handwritten text explaining what was going on.   I added some big selvage flowers to the "fields" of selvages at the bottom of the board.  I thought maybe I was almost done. 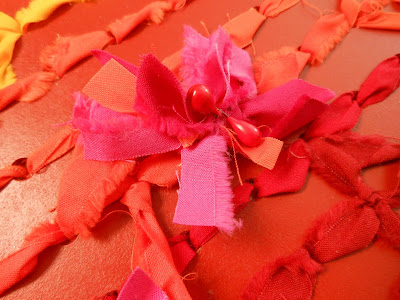 But while I was not sleeping in the middle of the night, I realized that the work was a disaster.  None of its bits and pieces went together, despite my efforts to invent a master rationale.

In many aspects of life I have always been tempted to use brute force when things aren't going well.  I won't detail how this played out in family or work life, but in my art career, for instance, I always figured that you could tame a lumpy piece with plenty of ironing or plenty of quilting, that you could make things stay flat with two more coats of matte medium, that you could resolve a bad composition with more shapes around the edge or by slashing it in the middle and piecing in some more bits.

In most cases in the past I have come to my senses before sending the poor stomped-upon piece of work out in public, but it seems that I have to work through the process of beating it into submission before I realize that I can't.  And that's what I had been doing with all those selvages and gloves.

Now I could do Plan B.  Stay tuned.