Eva Hesse was one of the most important sculptors of the 1960s, pioneering the use of nonconventional materials such as latex and fiberglass, along with textiles.  (Her early death from a brain tumor might have been related to noxious solvents and fumes used in her work.)  Her close friend Lucy Lippard is a well-known critic and curator.  Lippard is also a staunch feminist, which makes me lift an eyebrow at some of her remarks.  I think in the last 40 years we've gotten less comfortable with generalizations about what women do or feel. 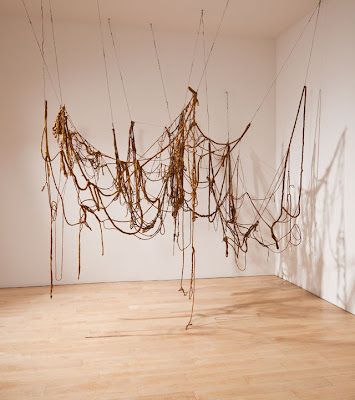 The most salient features of Hesse's art can be related to her fascination with repetition:  "It's not just an esthetic choice," she said.  "If something is absurd it's much more greatly exaggerated if it's repeated.  Repetition does enlarge or increase or exaggerate an idea or purpose.  I guess repetition feels obsessive."  The wrapping and binding and layering process is also repetitive and makes the viewer relive the intensity of the making in a manner far from the abstract or didactiv way in which process is used by most men.

Women are always derogatorily associated with crafts, and have been conditioned towards such chores as tying, sewing, knotting, wrapping, binding, knitting, and so on.  Hesse's art transcends the cliche of  "detail as women's work" while at the same time incorporating these notions of ritual as antidote to isolation and despair.  There is that ritual which allows scope to fantasy, compulsive use of the body accompanied by a freeing of the mind.  The mythical Penelope is always being mentioned pejoratively in regard to art by women.  Yet hers was a positive, not a negative action, despite its impermanence.

The act itself can be known, safe, but the result can be highly unexpected.  Repetition can be a guard gainst vulnerability; a bullet-proof vest of closely knit activity can be woven against fate.  Ritual and repetition are also ways of containing anger, and of fragmenting fearsome wholes.

Hesse used the grid as both a prison and a safeguard against letting an obsessive process or excessive sensitivity run away with her.  Women frequently use rectilinear frameworks to contain organic shapes or mysterious rites of autobiographical content.  An integral part of Hesse's work is that certain pleasure in proving oneself against perfection, or subverting the order that runs the outside world by action in one's inside world, in despoiling neat edges and angles with "home-made" or natural procedures that relate back to one's own body, one's own personal experience.