Recently I participated in a collaborative project in which members of a group of mostly middle-aged and older artists were paired with members of a group of younger, hipper artists.  We were asked to make art on the theme of "cosmopolitan localism," which I thought was a bit obscure, but I decided that the most cosmopolitan aspect of our city is the immigrants from many different countries who have settled here in the last decades.

Since I don't draw and didn't want to use photography in this project, I decided to portray the immigrants by going to my favorite ethnic grocery store and buying a lot of food products from different countries.  Then I mounted them on a board in mandala fashion, leaving one quadrant empty for my collaborator to work with.

For the backgrounds, I used a map of the parts of town where most of our immigrants live, and some handmade paper that seemed kind of exotic in feeling.  I decorated the edges of the composition with a knife, fork and spoon that I had found on the street (the fork and the spoon had been run over and flattened) and a pair of chopsticks. 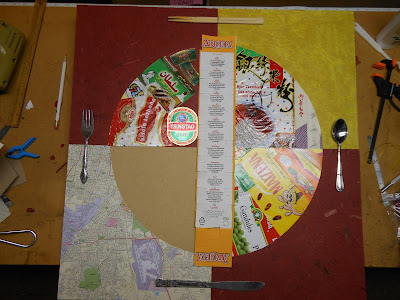 Here are some of the details. 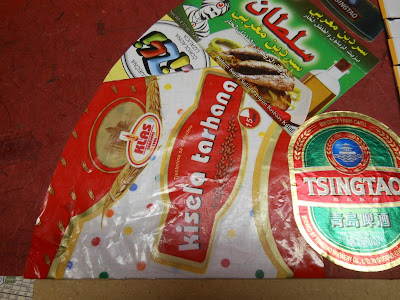 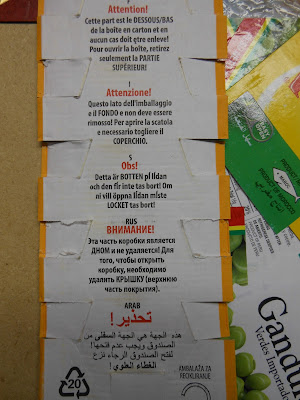 One of the things I learned is that shiny plastic see-through packaging has no affinity for adhesives.  After trying two different kinds of glue I finally got it to stick with huge quantities of matte medium, but even so it didn't want to cooperate.  The paper and cardboard packages were much easier to deal with.

Tomorrow I'll show you what happened next.  Meanwhile, I'll tell you that the collaborative works are on display at the Patio Gallery at the Jewish Community Center in Louisville, through July 14.  If you're in the vicinity, drop by and see our stuff!
Posted by Kathleen Loomis at 6:05 AM