We're just back from an adventure -- two weeks in Paris.  The food was glorious, of course (I'll be writing about that part of the trip on my food blog) and the art was magnifique.  My reporting efforts were stymied a bit by the prohibitions on photography at some of the museums, which I was pretty good about following.  It was annoying to see dozens of others snapping away and not getting busted (one or two show-trials-with-guillotine would probably increase compliance dramatically).  But I'll do my best to share what I could memorialize.

First off, I confess to a mortal sin in the religion of art.  I hated the Louvre.

We were told that when the Louvre had its last major renovation it was planned to handle 2.5 million tourists per year -- and this year they're expecting 10 million.  The place was mobbed, and even though our museum passes allowed us to walk right in instead of waiting on a l-o-n-g line, once we got inside it was chaos.

We first hiked to the cellar for a spin around the old 12th Century tower, the original structure in what became a vast royal palace.  Unfortunately, somebody thought it would be a good idea to let Michelangelo Pistoletto use the beautiful old walls as backdrop for a huge neon installation that looked  to me more like Vegas than Paris.  Apparently the phrases say "love the differences" in many languages. Yuk. 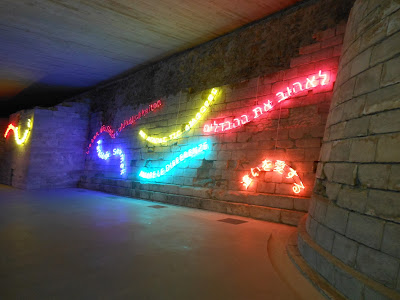 Our tour organization had provided us with little MP3 players so we didn't have to get the museum audioguides.  We fiddled with them for ten minutes before deciding they were worthless.  The buttons were too small to see, let alone push.  We could access only one of the 20 tracks on the device.

Then we read the brochures and realized that the content was apparently downloaded from the Art for Dummies publishing house. 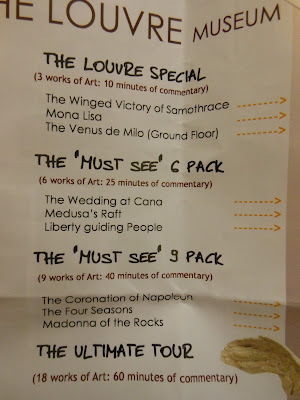 Not off to a particularly good start, and I will refrain from describing the condition of the toilettes.